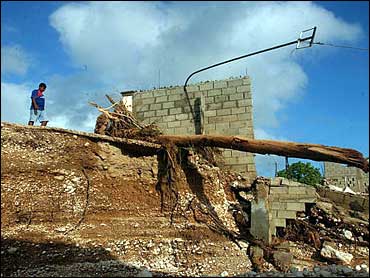 Sobbing villagers tore through heaps of mud with their bare hands Tuesday, searching for loved ones as the death toll from flooding in the Dominican Republic and Haiti rose to at least 363 and trucks dumped scores of corpses into a mass grave.

An Associated Press reporter counted at least 180 bodies on the Dominican side of Hispaniola island by Tuesday afternoon. Another 100 or so had been dumped in the mass grave, according to Lt. Virgilio Mejia with the Dominican National Rescue Commission.

There were 83 confirmed deaths on the Haitian side, but the toll in both countries was steadily rising. More than 250 were unaccounted for in the Dominican Republic and 62 were missing in Haiti, mostly in the town of Fond Verrette.

"I've looked at the bodies in the morgue and couldn't recognize any of them," said Jude Joseph, 30, who came to Jimani from Haiti's capital of Port-au-Prince to sell rice at a border market and visit family members in Bobmita, La Cuarenta and Barrio El Tanque, neighborhoods that were swept away in the floods.

"I don't know what to do. I've been left with nothing," said Joseph, whose nine relatives were missing late Tuesday.

Rain has pelted the island for weeks, but a downpour Monday caused the Solie River to burst its banks, sweeping away the three neighborhoods of wooden shacks built mostly by Haitian migrants working in this impoverished Dominican town. At least 50 of the dead on the Dominican side were Haitians.

"I found them this morning," said Shela Lena, 24, who lost her sister-in-law and 3-year-old nephew Tuesday. She came from Port-au-Prince to work as a maid.

About six miles outside of Jimani, emergency workers in surgical masks and white gloves watched as trucks dumped the 60 naked corpses into a 15-foot ditch. More bodies were on their way. No relatives were present at the grave.

Some on the Dominican side were believed to be Haitian workers living there illegally and therefore afraid to claim the bodies of family members.

The Dominican government had issued an alert Sunday, warning people that rivers may swell with the rains. But Jimani — more than 100 miles west of the Dominican capital of Santo Domingo — has only limited access to radio broadcasts.

As rescue workers and families pulled bodies from the mud, medical teams draped work areas with mosquito netting. The insects can carry parasites that cause malaria and dengue fever. Some people were also being given tetanus shots.

"We can't find her anywhere," cried Norma Cuevas, 32, as she desperately searched for her 63-year-old mother among dozens of other families reaching their hands through mud.

U.S. Marines, who are leading a 3,600-member multinational task force sent to stabilize Haiti since the ouster of President Jean-Bertrand Aristide on Feb. 29, were heading to Fond Verrette to look for victims and help in emergency work. Haiti's U.S.-backed interim Prime Minister Gerard Latortue was expected to fly to Fond Verrette later Tuesday.

Many roads on both countries were still impassable.

Elena Diaz, 42, who lost her daughter in the floods, sobbed as she waited in a long line outside the morgue where she went to look for her son-in-law and three grandchildren.

"They found my daughter. Now I have to see if I have some family left," she said.

The raging water carried some victims away. Bodies were found as far away as six miles downstream, said Maximo Noves Espinal, an emergency official in Jimani.

Haitian officials were struggling to determine the full extent of the tragedy.

Since a three-week armed rebellion pushed Aristide from power, Haiti's interim leaders have struggled to provide basic services to its 8 million people. Left nearly bankrupt, the government has scant resources to deal with natural disasters.

The rains left at least three others dead in other parts of the Dominican Republic while one man was also killed in Puerto Rico. Another man was killed aboard a Guyanese-registered freighter that sank Monday in rough seas.

The floods were some of the deadliest in a decade.