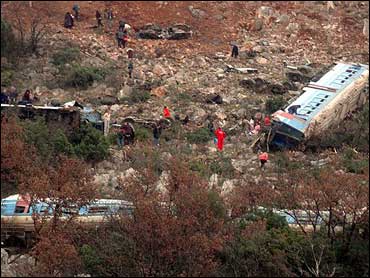 With Mark McGwire in hot pursuit of baseball's home run and RBI records, his St. Louis teammates have been playing in his shadow.

They emerged on Sunday, when the Cardinals used the baserunning of Royce Clayton and the strong pitching of Mark Petkovsek and Kent Bottenfield to beat the Arizona Diamondbacks 2-0.

Clayton singled twice and scored after each hit, and Petkovsek pitched five strong innings and drove in a run.

Petkovsek (4-3) allowed two hits and walked two before a cramp in his left leg forced him to leave the game. Bottenfield pitched two-hit relief for four innings for his fourth save.

"The bullpen's thrown a lot of innings, and this was a day where I was really supposed to throw on the side anyway, so we just held off, and it worked out well," said Bottenfield, who pitched five innings as a spot starter against the Chicago White Sox on Wednesday.

The shutout was St. Louis' fourth this season, one more than they had all of 1997.

"One reason I like our club so much, if you look at most days we play, is that we have at least five guys who can steal a base two guys (Clayton and Delino DeShields) in the middle and three outfielders," manager Tony LaRussa said. "So with that kind of speed, and you've got the extra-base potential, we've got a nice offensive club."

Willie Blair (2-9) struck out McGwire three times. McGwire drew his major league-best 71st walk in the sixth and reached third on a double by Gary Gaetti, but Ron Gant grounded out to end the inning.

"I've had some pretty good success against Mark," said Blair, who has given up one single to McGwire in 13 at-bats and struck him out eight times. "I got ahead of him, and he had to try and hit some of my pitches."

Petkovsek gave himself a 1-0 lead with an RBI single with two out in the fifth. Clayton got into scoring position by stealing second.

The Cardinals scored again in the seventh inning when Clayton led off with another hit, reached second on a sacrifice and later came home on another infield hit, Willie McGee's single off Blair's glove.

Clayton batted leadoff in 34 games early this season, but now hits seventh. He said moving down was disappointing for a while.

"But I just figured you could do the same thing hitting seventh," he said. "I can still steal bases and still try to get in scoring position. If we can score some runs down at the bottom of the order, it's just going to make our lineup that much better."

Blair left in the eighth after giving up his eighth hit, to leadoff hitter Brian Jordan.

"Willie's pitched a lot of good games for us this year if we'd give him some more run support," Diamondbacks manager Buck Showalter said.

Amaury Telemaco, who followed Blairgave up a hit to Gaetti, but Diamondbacks right fielder Brent Brede saved a run by diving for a sinking liner by Clayton, then doubling Gaetti off first.

DeShields hit his NL-leading seventh triple in the first, extending his hitting streak to 14 games, but was stranded when Blair struck out McGwire and got Jordan to ground out.

Notes: Gant started in left field for St. Louis after missing eight games because of tightness in his right hamstring. ... Clayton stole three bases in the three-game series, moving ahead of DeShields for team leadership (16). ... The Diamondbacks, who use the roof on their new ballpark to keep the sun off fans during day games, are 1-2 with the roof closed. ... The Diamondbacks said it will take $2,000 to repair a hole punched in the scoreboard by McGwire's batting practice shot Saturday. ... The Cardinals won two of three games in their first visit to Phoenix, improving to 4-11 in their last 15 games.