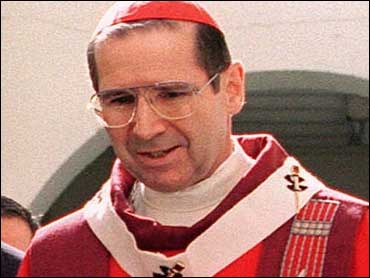 Lawyers and alleged victims went to the Los Angeles archdiocese Monday to deliver the first lawsuit ever alleging that an American cardinal engaged in racketeering by covering up for abusive priests, reports CBS News Correspondent Vince Gonzales.

Andrew Cicchillo and his twin brother Joe say Cardinal Roger Mahony protected Father Carl Sutphin, a man they claim molested them for 10 years starting when they were six years old.

"I can't believe a cardinal keeps a pedophile on staff. I mean that was the most incredible thing. And he admitted it. He admitted molesting me," said Andrew Cicchillo.

"To wake up with some guy's hand in your pajamas at 2 o'clock in the morning, you know something's wrong," said his brother Joe.

In 1991, when Andrew found out Sutphin was a chaplain at a hospital with a pediatric unit, he wrote directly to the cardinal about his alleged abuse. He says he was told the priest had confessed and would be forced to retire.

In 1994, a mother of two other alleged victims told the archdiocese that her sons also claimed Sutphin molested them.

"He should've been arrested," said the woman, who asked that her identity be protected.

"He should've been turned over to the law. Certainly should not be a priest today."

Sutphin did not retire. He went on sick leave and resurfaced as a chaplain at a nursing home. For the last four years he's lived in the cardinal's official residence with Mahony and a handful of his top lieutenants.

The archdiocese says Sutphin's ministry was restricted; while he performed mass, he was kept away from children, and no new allegations have been reported. He was forced to retire in February.

Mahony, 66, was hospitalized Monday for treatment of a blood clot in his lung. He is in good condition, according to a statement from the archdiocese.

He returned last week from a two-day Vatican summit where he met with the pope and other U.S. cardinals to discuss the sex abuse scandal that has rocked the Roman Catholic church.

Mahony says he has had a zero tolerance policy since 1988 but police were not told about Sutphin until recently, more than ten years after Andrew Cicchillo first wrote to the cardinal.

The families claim the cardinal has a pattern of protecting abusive priests and that's why they chose to file a racketeering case, a tactic normally used against organized crime bosses.