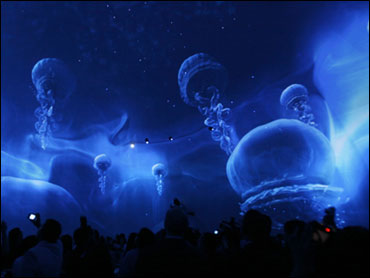 One of the most powerful U.S. Roman Catholic leaders said in an interview published Friday that he may ask fellow bishops to consider removing the head of a national panel reviewing priest abuse allegations.

Los Angeles Cardinal Roger Mahony said he was outraged by a statement Frank Keating, a former governor of Oklahoma, made this week comparing some unnamed members of the church hierarchy to the Mafia.

"All I can say is, from the bishops I've listened to — and several called me this morning — this is the last straw," Mahony told the Los Angeles Times. "To make statements such as these — I don't know how he can continue to have the support of the bishops. I don't know how you back up from this."

The bishops meet next week in St. Louis, and Mahony told the newspaper he is considering raising the question of whether Keating, a former FBI agent and federal prosecutor, should remain in his appointed role as head of the National Review Board.

Keating said in another interview earlier this week: "I certainly have concluded that a number of serious officials in my faith have very clay feet. To act like La Cosa Nostra and hide and suppress, I think, is very unhealthy."

One person applauding Keating's remarks was Los Angeles County District Attorney Steve Cooley, whose office has been investigating allegations of sexual abuse by priests. The office has charged eight current or former priests and a former seminarian with sexually abusing children and expects more charges.

For more than a year, Cooley said, the archdiocese has been "aggressively resisting" turning over subpoenaed church documents relating to investigations. Keating "apparently has been as frustrated as we have been in our efforts to secure information," he said.

Church lawyers have argued that the documents contain communication between Mahony and the suspected priests that is protected by the First Amendment. The issue is pending before a judge.

The United States Conference of Catholic Bishops appointed the National Review Board last year to survey all 195 U.S. dioceses and determine how many priests had been accused of sexual abuse since the scandal surfaced in January 2002. Keating was appointed to head the panel by the conference president, Bishop Wilton Gregory.

Mahony's initial resistance to that survey led to conflict between Keating and the cardinal, who heads the nation's largest Roman Catholic archdiocese. Keating accused Mahony of listening "too much to his lawyer and not enough to his heart."

A spokesperson for Voice of the Faithful, a group advocating a larger role for lay people in church administration, says the organization opposes any effort to remove Keating.

"It's secrecy and authoritarianism and suppression that got us into this mess and it is openness, truth-telling and disclosure that will help get us out of this mess," Luise Dittrich said.

Dittrich said Keating "has been working tirelessly really in the face of a sometimes cruel obfuscation."

"To try to remove him is another piece of evidence of foot-dragging," Dittrich said.