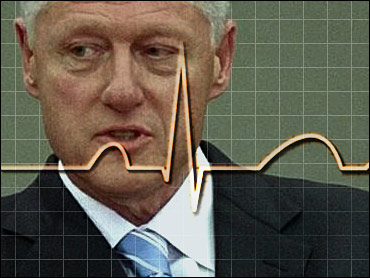 The Early Show medical correspondent Dr. Emily Senay describes what lies ahead for him and the other 300,000 Americans who undergo this procedure every year.

Many people who've had bypass surgery can get out of the hospital in under a week. The recovery period for most people lasts between 6 and 8 weeks. People who have had less invasive surgery may have an even shorter recovery time.

During this recovery period, many patients are placed on special diets -often one that is low in fat and sodium. They are also restricted from doing physical activities that would be too stressful to the heart muscle. And there are also certain medications they will need, to keep their blood pressure and cholesterol levels in check.

If the surgery is done properly and the patients follow their doctors' instructions during recovery they can expect to go back to a normal life and live out a normal lifespan.

Yet, there are some medical problems that can arise as a result of this type of surgery.

Some people may develop infections at the site of the incisions, which need to be tended to immediately. People may also complain of pain at the site of the incision. And just because they've had surgery, it doesn't mean that more heart problems won't develop in the fture. There are many people who may have to go in for more bypass surgery several years after the initial operation.

What many people may not know is that many bypass patients may suffer from a bout of depression after surgery. One reason is the fear that they will get sick again.

Many doctors recommend that their patients take up light weight-training. And in some cases, medications may be prescribed. It's very important for this depression to be kept in check because studies have shown that people who are depressed immediately before or after coronary artery bypass surgery face an increased risk of early death.

To prevent further heart problems, the most important thing a person can do is to follow the advice of his or her physician. For instance, if your doctor says to stay away from fast food, stay away. Patients should never return to the activities such as smoking that may have contributed to their heart problems. A successful heart bypass procedure gives people a second chance at leading a normal healthy life and it's up to them to make the most of it.