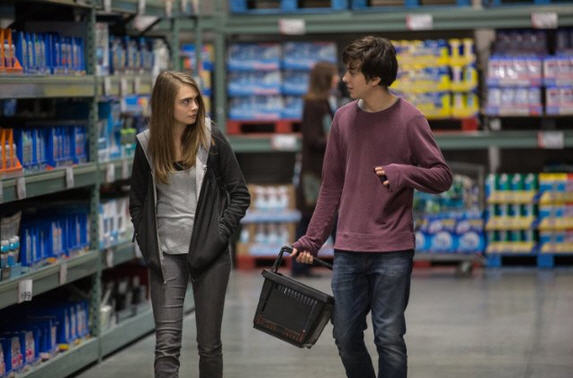 The film adaptation of John Green's 2008 novel, "Paper Towns," is out, and fans of the book could not be more excited. British supermodel Cara Delevingne and "The Fault in Our Stars" alum Nat Wolff star in the coming-of-age story that is part-teen romance and part-mystery.

As book readers know, the plot revolves around the complicated friendship of Margo Spiegelman (Delevingne) and Quentin "Q" Jacobsen (Wolff). After years of growing apart from their childhood friendship, Margo shows up at Quentin's window one night to drag him into a mischievous adventure, intensifying Quentin's crush on her even further. But when Margo goes missing the next day, Quentin and his friends have to follow a set of clues she left behind to track her down.

Delevingne's performance in her first major film role does not disappoint. Her carefree but magnetic portrayal of Margo is true to the character that book readers loved, with a little taste of the charismatic spunk the world adores about Delevingne herself. Despite her perfect match with Margo, the 23-year-old said she also connected with other characters.

"Any character is easy to relate to," Delevingne told CBS News. "I relate to Quintin as much as I relate to Margo."

Wolff carries the film in the role of Quintin, played with a lovable combination of comedy and vulnerability.

John Green fans are no stranger to Wolff, who also had a role in Green's first book adaptation, "A Fault in Our Stars."

"The most important thing about this film is we were so connected and there was so much chemistry between us," Delevingne said. "We really had so much fun off camera and I think it translates to the film as well."

"Paper Towns" also features a stand-out soundtrack. It features contemporary artists like Santigold, Grouplove and Haim, but often times feels retro. Wolff and his brother Alex even penned a track for the movie, called "Look Outside."