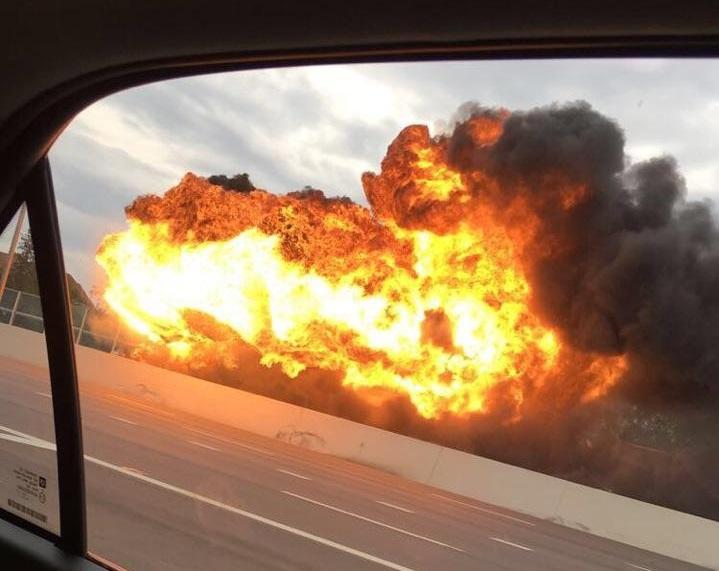 The crash on Interstate-75 left the driver dead while the truck driver suffered minor injuries, according to the Dayton Police Department.

Officials reopened the northbound lane of I-75 after having to close the interstate to all traffic earlier in the night.

"Interstate 75 southbound is going to continue to be shut down between (state) Route 4 and Third Street for the foreseeable future, maybe a day or two, so it's going to significantly affect the morning and evening commute for the next day or so," Dayton police Lt. Mark Ponichtera said.

WHIO reports that the fire burned for hours and smoke could be seen for miles.

Ohio Environmental Protection Agency and hazardous materials crews reported to the scene, according to Ponichtera.

"We had quite a bit of a scene, large explosions going on right now," Poinchtera said in a hastily called press conference off the interstate. "The fire crews had to let that burn out before they were able to put foam on that. We do have a Haz-Mat response here as a result of that."

Twitter user @JeffMonbeck caught this angle of the crash and posted video online:

There were reports of smoke filling the sewer system in a nearby town and residents were urged to call 911 if they smelled any in their basement or home.

WHIO reports the Montgomery County Coroner's Office is on scene. Identities haven't been released of either the deceased or truck driver.

"Then I heard a boom. And I thought, 'Oh, that's a little bigger than the fire.' "It was huge," Roediger told WHIO. "I felt the heat from it. I saw kids riding their bikes, and I told them: You might want to go the other way."

A traffic cam from the Ohio Department of Traffic caught the moment a giant fireball exploded into the sky after the two vehicles collided. Watch the video below: