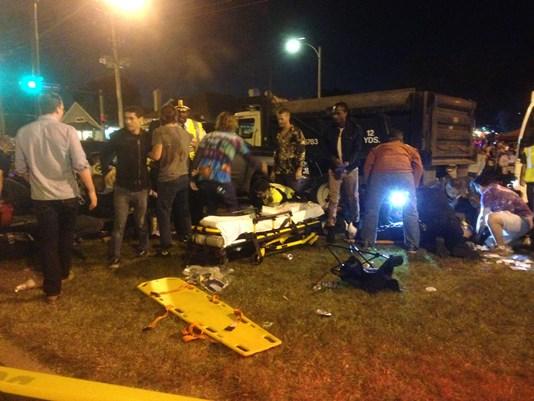 NEW ORLEANS -- New Orleans police say the number of people injured after a vehicle crashed into a crowd watching the Krewe of Endymion parade in the Mid-City section of New Orleans has increased to 28 and a suspect is in custody.

Police Chief Michael Harrison says one person in custody and that he is being investigated for driving while intoxicated. A New Orleans police spokesperson told CBS News the incident was not related to terrorism.

The Department of Justice confirmed to CBS News that they saw no link to terrorism.

Harrison says that 21 people were hospitalized after the crash with five victims in guarded condition. The ages of those injured ranges from three-years-old to 30s, CBS affiliate WWL-TV reports.

Seven others declined to be hospitalized.

Witnesses say the truck was traveling down the open lanes of Carrollton Avenue headed toward city park when it veered left and traveled toward the neutral ground of Orleans Avenue, WWL-TV reports. The crash was reported Saturday at about 6:45 p.m.

“Our thoughts and prayers are with the victims and their families,” said Mayor Mitch Landrieu,WWL-TV reports. “We are grateful that none of the injuries appear to be life-threatening. I want to thank all of our emergency personnel for responding quickly, aiding the injured, and apprehending the drunk driver.”

Among the injured was one New Orleans police officer. Harrison said the officer, who was on duty, was undergoing tests to determine the extent of her injuries. She was in “good spirits,” he said.

The accident came during one of the busiest nights of Mardi Gras when thousands of people throng the streets of Mid-City to watch the elaborate floats and clamor to catch beads and trinkets tossed from riders. As police and city officials were assessing the accident scene, people were streaming home as plastic bags that used to hold trinkets and discarded beads littered the ground. The area where the accident occurred was cordoned off with police barricades.