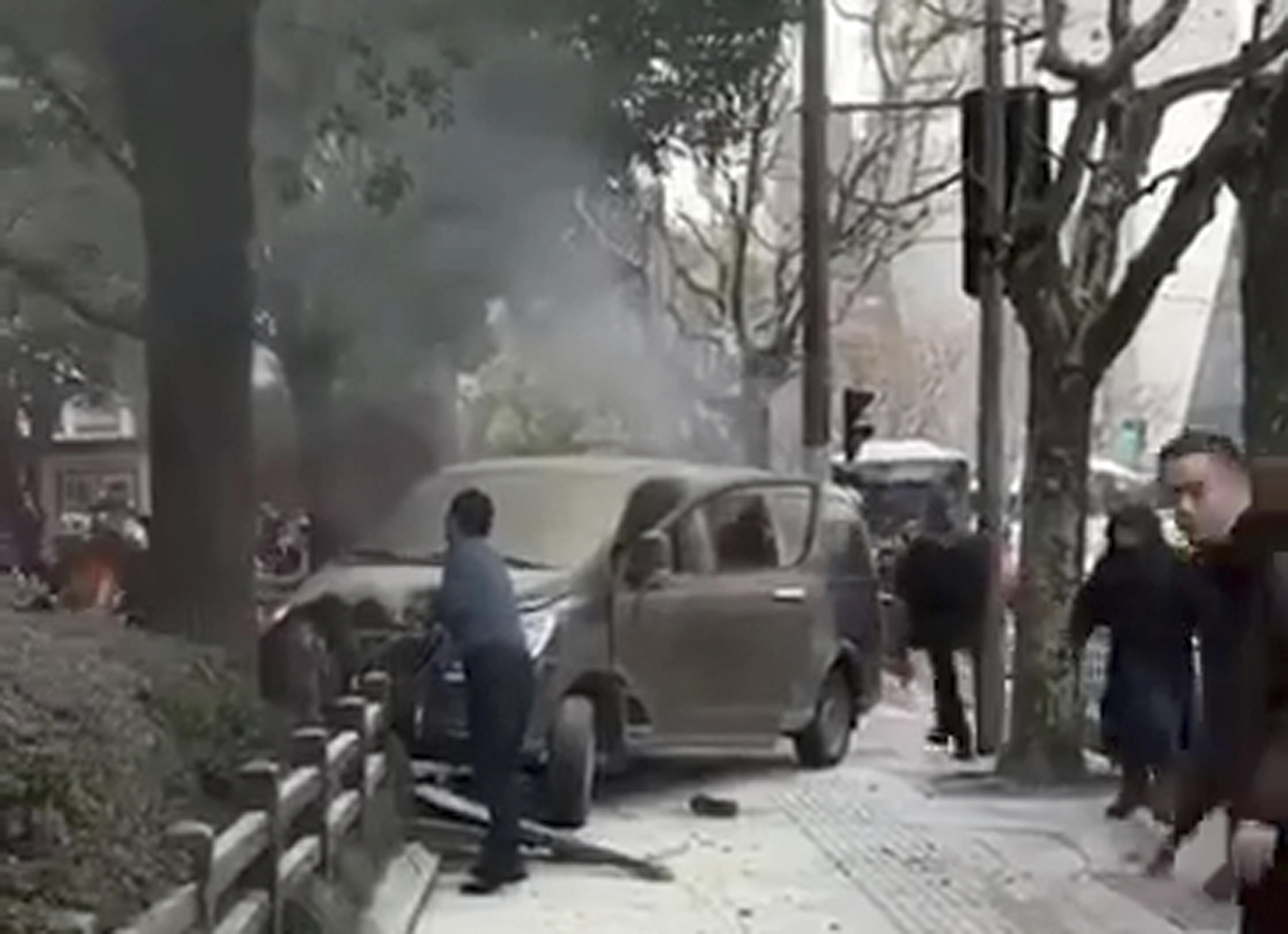 SHANGHAI -- A minivan carrying gas tanks plowed into pedestrians near a prominent park in downtown Shanghai Friday, injuring 18 people, local authorities reported. Shanghai police said the crash was caused by a 40-year old man surnamed Chen who was smoking inside the van, accidentally igniting the gas he was transporting.

Police appeared to dismiss fears the crash could have been an attack in the heart of the Chinese financial hub.

The driver and two other people suffered serious injuries in the crash.

The driver works for a Shanghai metals company and had no criminal record but was now under suspicion for transporting dangerous materials, police said.

The minivan, registered in the southern province of Jiangxi, veered onto a sidewalk and burst into flames around 9 a.m. near People's Park, authorities said.

The vast city center plaza is also home to the headquarters of the Shanghai municipal government, which oversees a metropolis of almost 25 million people that is widely regarded as China's most cosmopolitan city.

The website of the local Xinmin Wanbao newspaper and other local news outlets said the van struck five to six people waiting for a light change at a busy pedestrian crossing.

Videos on social media showed injured people lying on the pavement next to a Starbucks cafe and others pinned under the tires of the van. Firefighters were seen trying to put out a blaze inside the vehicle.

A cleaner surnamed Xu told The Associated Press she saw smoke coming out of the van as it drove down the street before veering out of control.

"It couldn't stop, crashed into the corner and caught fire," said Xu, who works in a building across the street from the crash site. "Two men were trying to pull the passenger out of the car, but failed. Other people told them to stop. Then the police and ambulance arrived."

The Shanghai-based news outlet Pengpai, citing a witness, reported that the vehicle was carrying six people and several canisters of gas typically used for cooking and heating.

Police officers stood guard Friday afternoon outside the emergency room at the Changzheng Hospital in central Shanghai, where a nurse told The Associated Press the injured were receiving treatment.

A Shanghai-based Starbucks spokesman told the Reuters news agency the store wasn't damaged and its customers and employees were safe.

While indications were the crash was an accident, vehicle driven terrorist attacks have killed scores globally in recent years.

In China, five people, including 3 attackers, were killed in 2013 when a 4x4 vehicle plowed through a crowd in front of Tiananmen Gate in the center of Beijing. The attack was blamed on separatist extremists from the Turkic Muslim Uighur ethnic group native to northwestern China.

Friday's accident occurred just as British Prime Minister Theresa May was speaking at a business event in the city. May's speech was at a forum in the Lujiazui district on the opposite side of the Huangpu River from People's Park.

Other speakers at the event included Li Shufu, the chairman of Chinese carmaker Geely and Nobel Prize-winning physicist Kostya Novoselov.

May on Thursday met with Chinese President Xi Jinping in Beijing as part of her three-day visit aimed at establishing a new trading relationship after Britain leaves the European Union.

The accident also comes at the start of the Lunar New Year travel crunch, when hundreds of millions of people return to their hometowns for the most important family holiday of the year. During the weekslong period, authorities place a special emphasis on safety on the road and aboard planes, trains and ferries.