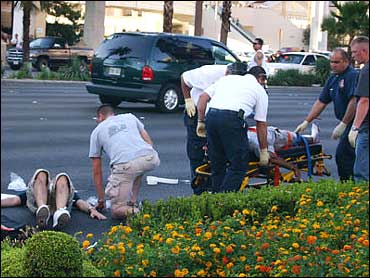 A driver intentionally steered his car onto a sidewalk on the crowded Las Vegas Strip and then accelerated in a deadly scene resembling "humans being mowed down like a lawnmower," police said Thursday.

One person died and 13 were hospitalized, many with major injuries, after Wednesday's crash. A 27-year-old man faces charges of murder and attempted murder, Deputy Police Chief Greg McCurdy said.

"It appears he did this intentionally. The reason is questionable," McCurdy said Thursday.

The man, Stephen Michael Ressa of Rialto, Calif., had also been sought by his hometown police in a near-fatal assault Monday on his mother, who owned the car Ressa was driving in Las Vegas.

The victims, including 11 tourists, were walking in front of the Bally's and Paris hotel-casinos on Wednesday when the car struck them, then crashed into a wall and came to a stop in a landscaped area in front of Bally's.

The injured were strewn along the sidewalk and were being treated in the street by emergency personnel as stunned tourists looked on. Traffic on the Las Vegas Strip was stopped for almost five hours.

Ressa was unhurt and was arrested at the scene by an off-duty officer, police said.

Ressa was held Thursday without bail at the county jail and is scheduled to appear in court Friday.

During interviews with detectives, Ressa appeared lucid and correctly answered questions about his ability to determine right and wrong, McCurdy said. But Ressa's statements were "bizarre in nature," McCurdy said.

Results of alcohol and drug tests were pending.

The dead man was identified as Gordon Kusayanagi, 52, of Hollister, Calif. Seven of the injured remained in hospitals Thursday, three in critical condition, spokeswomen said.

Rialto police Det. Sgt. Reinhard Burkholder said Ressa was wanted for questioning in the assault on his 54-year-old mother.

"He punched her numerous times in the face and choked her into unconsciousness and stood over her with a butcher knife," Burkholder said.

Ressa may have been under the influence of methamphetamine, Burkholder said.

He was not being pursued by officers when he crashed in Las Vegas, police said.