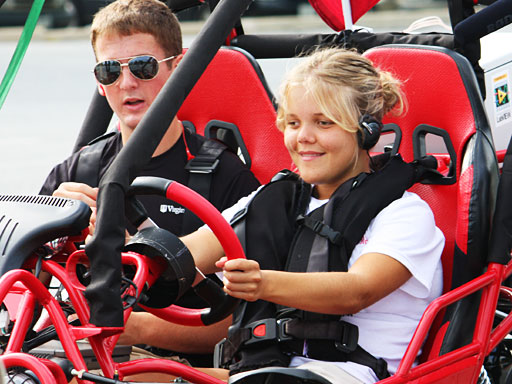 WASHINGTON (CBS/AP) Blind behind the wheel? Maybe, say researchers at Virginia Tech, who plan to demonstrate a prototype car that helps a blind person drive by next year.

It's not a self-driving car. The concept is the car can understand its surroundings and deliver the information to the driver through "non visual interfaces." The driver could then presumably make real-time decisions based on the feedback.

One interface, called DriveGrip, uses gloves with vibrating motors on areas on the knuckles. The vibrations signal to the driver when and where to turn.

Another interface, called AirPix, is a tablet about half the size of a sheet of paper with multiple air holes, almost like those found on an air hockey game. Compressed air coming out of the device helps inform the driver of his or her surroundings, essentially creating a map of the objects around a vehicle. It would show whether there's another vehicle in a nearby lane or an obstruction in the road.

"We're exploring areas that have previously been regarded as unexplorable," said Dr. Marc Maurer, president of the National Federation of the Blind. "We're moving away from the theory that blindness ends the capacity of human beings to make contributions to society."

Advocates for the blind consider it a "moon shot," a goal similar to President John F. Kennedy's pledge to land a man on the moon. But for blind people who have longed to drive their own car, they are tired of spinning their wheels.