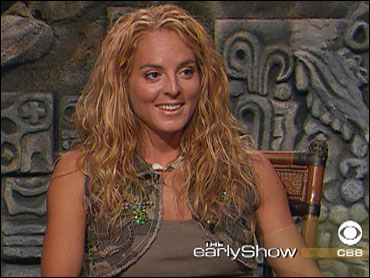 Cindy Hall won a brand spanking new 2006 Pontiac Torrent – but she lost a shot at $1 million.

Choosing a sure automobile over potential riches, Cindy became the latest "Survivor" competitor to fall victim to the curse of the car: no one in the history of the show has won the vehicle and gone on to win the big money.

On The Early Show Friday morning, Cindy told co-anchor Rene Syler that things are not what they seem on "Survivor": "Rafe is running the show," said Cindy. "You have to give him credit. He's playing very smart by making Stephenie look like she's running the show."

Because Cindy is a zookeeper, Syler thought it would be fun to play a word game with her, assigning an animal to each "Survivor" player.

Rafe: "He would probably be some sort of primate."

Danni: "Oh, Danni would be something tall and lean and athletic."

When Syler suggested a giraffe, Cindy said, "That's a good one!"

As for Thursday night's installment of "Survivor," while the perennial bad luck continued automobile-wise, some things had changed human-wise.

After Judd's departure, the group dynamic was a shadow of its former self. Paranoia still percolated but the Final Five seemed more at ease.

"It's the gay guy and the four women," said Rafe, making goofy faces to his female friends.

And there was much laughing.

But Rafe would not laugh for long. After winning a Mayan puzzle challenge, Cindy was presented with the keys to her shiny new car.

She was also presented with a proposition: keep the car and risk the "curse" or give up the wheels and let the other four competitors drive out of the jungle with their own Pontiac Torrents.

Surely the agreeable Cindy would give up her car for a virtual guarantee that she'd make the Final Four.

"I'm here to beat the odds," she said, snatching the keys and driving off with Stephenie to enjoy a barbeque at an architectural camp site, where the pair feasted like savages and giggled like school girls.

But amid the giddy gluttony, there was strategizing. Danni was the biggest threat remaining. She would have to be the next to go, they decided.

And then they drank more rum and gazed at the car.

But people were not so complacent chez 'Camp Survivor.' Rafe was miffed by Cindy's act of selfishness. How could she take the car when she had an opportunity to give away four cars?

"Am I playing this game too nicely?" the philosophical Mormon wondered.

Apparently not. After Steph won a crucial immunity challenge guaranteeing her a spot in the Final Four, Rafe turned against Cindy. He secured votes from Danni and Lydia and then managed to sway Stephenie despite her concerns about jeopardizing votes by the jury.

One for Rafe, three votes for Cindy.

And just like that, the zookeeper from Naples, Fla. was gone.

But there didn't seem to be any hard feelings.

"I'll think about you guys when I see the stars through the sunroof of my car," Cindy told her tribe mates as her torch was extinguished.

The two-hour season finale of "Survivor: Guatemala" will be telecast Sunday night, Dec. 11, on CBS at 8 p.m. ET/PT, 7 p.m. Central. The winner will appear on The Early Show Monday morning.
By Stephen Smith

The Guy In The 'Clubhouse'