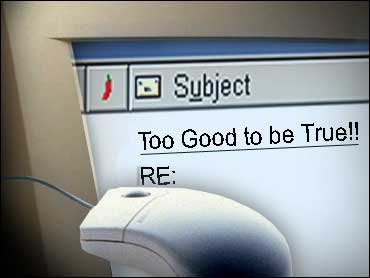 The Better Business Bureau is out with a warning about fraudulent websites that are tricking consumers into buying used cars at great prices.

The BBB says the websites offer repossessed cars at cheap prices, and tell consumers to wire the money. But in the end, says the BBB, the consumers never get the cars and never see their money again.

Some 75 percent of consumers turn to the Internet to help them in their car buying quest, and some actually make their purchase online, explains "Early Show" consumer correspondent Susan Koeppen.

Koeppen spoke with Amanda Hanson, whose battle with multiple sclerosis left her on a tight budget, looking for a vehicle to fit her needs. Ultimately, she became a victim of thieves, to the tune of $2,000, says Koeppen.

It was, says Koeppen, a flashy site for what appeared to be a Carfax-certified dealership, but turned out to be a vehicle for crooks., advertising "an extensive list of repossessed cars at outrageously low prices."

Amanda settled on a 2006 Chevy Cobalt, and wired a deposit of more than $2000 to the site through a Moneygram.

"What assured me of their reliability," Hanson says, "was the Carfax logo. But I also did my own research on the company itself."

America Auto Sales, Koeppen reports, has an "A" rating with the Better Business Bureau, but the website was a scam, and quickly disappeared from the Web.

And the real America Auto Sales was left answering more than 1,000 calls about a website that stole its identity, and thousands of dollars from consumers, Koeppen says.

"It's a sad, sad deal," observes America Auto Sales car salesman Micah Guidry. "This is a fraud. This company really doesn't exist. They're using our name and our address and all of our information, but this company doesn't exist."

As for the website's claim that it was certified by Carfax, it tells CBS News it doesn't certify dealerships. "These are trusted companies that consumers rely on and they're playing off that trust to dupe unknowing consumers," says Carfax's Christopher Basso.

In 2009, the FBI received almost 6,900 consumer complaints about Internet auto fraud, and 4,300 complaints have already come this year.

"It continues to grow as the Internet becomes more prolific and as criminals decide to use it as a medium for criminal activity," says Gordon M. Snow, the assistant director of the FBI's Cyber Division.

CBS News tracked down the website that took money from Hanson, which is now posing as Superauto Sales in Haazard, Ky., and still advertising the Chevy Cobalt Hanson paid more than $2000 for.

CBS News spoke online with a representative in a live chat offered by the website, who claimed the company is legit but, after a brief back-and-forth, dropped off when asked if the company is stealing from innocent consumers.

"It hurts more than I can say," says Hanson. "I would tell anybody who is looking to buy something online, if it's too good to be true, it is (not true)."

Koeppen adds that Moneygram got a cease and desist order against the individuals running the website that duped Hanson, demanding they stop telling consumers to wire funds through Moneygram.

CBS News also tried to call the people who run that website, with no response.

How can consumers protect themselves from being ripped off by crooks making fake websites for real companies, stealing those companies' identity?

Some red flags you could be alert to, says Koeppen, are prices that are too good, the dealer only communicating through e-mail and being unreachable by phone, and "the big thing" is the dealer only accepting payment by money wire transfer.

But, Koeppen points out, nothing replaces being able to see the car for yourself before turning over your money.