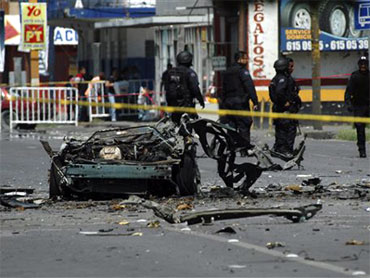 A drug cartel has used a car bomb for the first time in Mexico's decades-long fight against traffickers, setting a deadly trap against federal police in a city across the border from Texas, the mayor of Ciudad Juarez said Friday.

Mayor Jose Reyes said federal police have confirmed to him that a car bomb was used in the attack that killed three people Thursday.

It was the first time a drug cartel has used a bomb to attack Mexican security forces, marking an escalation in the country's already raging drug war.

Federal police and paramedics were lured to the scene by a phone call reporting that shots were fired at a major intersection and a municipal police officer lay wounded, Reyes told The Associated Press.

As the paramedics were working on the wounded man, a parked car exploded, he said.

Reyes said authorities later determined that the wounded man was not a policeman, although he was wearing a fake uniform. The man was among the three people who died in the attack. The others were a federal police officer and a medical technician.

Brig. Gen. Eduardo Zarate, the commander of the regional military zone, told reporters that up to 22 pounds (10 kilograms) of explosives might have been used, although investigators were still trying to determine what type.

He said the bomb might have been detonated remotely with a cell phone, adding that burned batteries connecting to a mobile phone were found at the scene.

"From what distance? We don't know. But we think it was a distance that allowed (the assailants) to watch the area, waiting for the police to get out of their vehicle," Zarate said.

The car bomb demonstrates the growing boldness and military sophistication of Mexico's drug traffickers, who have dramatically stepped up attacks against security forces and government officials since President Felipe Calderon deployed thousands of troops and federal police to crush the cartels in their strongholds.

"We have to change the way we operate," Reyes said. "We've started changing all our protocols, to include bomb situations."

City and federal authorities said the attack appeared to target only security forces.

A graffiti message appeared on a wall of a Ciudad Juarez shopping mall Thursday night warning of more car bombs.

In the northeastern border city of Nuevo Laredo, meanwhile, a series of shootouts Friday prompted the U.S. Consulate to warn American citizens in the city to remain indoors. The consulate said drug traffickers were throwing up roadblocks on at least one major avenue and were carjacking vehicles.

Roadblocks have been another tactic to recently emerge in Mexico's drug war. Gangs in the neighboring northeastern states of Nuevo Leon and Tamaulipas, where Nuevo Laredo is located, have thrown up the blockades to impede soldiers from coming to the aid of colleagues under attack.

Drug gangs have previously attacked Mexican soldiers and police with grenades and powerful rifles, and there had long been fears they might turn to bombings. Soldiers have seized homemade explosives from gang vehicles after gunbattles, and assailants have stolen explosive material from transport vehicles.

Federal police said the attack was in retaliation for the arrest of a top leader of the La Linea drug gang, Jesus Acosta Guerrero, earlier in the day.

Police said Acosta Guerrero, 35, was the "operations leader" of La Linea, which works for the Juarez drug cartel. He was responsible for at least 25 killings, mainly of rival gang members, and also ordered attacks on police, a federal police statement said.

The Juarez cartel appeared to claim credit for the attack in the graffiti message, which accused federal police of supporting the rival Sinaloa cartel, led by Mexico's most-wanted kingpin, Joaquin "El Chapo" Guzman.

"What happened ... is going to keep happening against all the authorities that keep supporting 'El Chapo,"' the message read. "We have more car bombs."

Calderon's government has long faced allegations that his government does not pursue the Sinaloa cartel as aggressively as other gangs, accusations he vehemently denies.

What appeared to be the charred bottom half of the explosives-rigged car still lay at the scene of the attack Friday. The debris from the blast was spread out over a 300-yard (300-meter) radius. The explosion also blew out the windows of a nearby home and blackened the corner of the building nearest to the crash.

"Thank God we weren't home," said a woman who lives in the damaged house. She refused to give her name, citing safety concerns, before driving away from the scene Thursday.

Although the car bomb was a new tactic, it was far from the deadliest attack on Mexico's security forces. Last month, a carefully planned ambush killed 12 federal police officers in the western state of Michoacan.

And a week before July 4 local and state elections, suspected cartel members ambushed and killed the leading candidate for governor of Tamaulipas. Calderon called the assassination — which followed a series of attacks and threats against candidates throughout the campaign — evidence that drug cartels were trying to control Mexican politics through intimidation.

On Wednesday, gunmen killed the nephew of the governor-elect of Chihuahua, the state where Ciudad Juarez is located, although it was unclear who was behind the attack. Mario Medina, nephew of Cesar Duarte, was shot in the back as he tried to escape from would-be kidnappers in the state capital, also named Chihuahua.

Earlier Friday, federal Attorney General Arturo Chavez said he could not confirm if the latest attack involved a car bomb and said investigators were running forensic tests to determine if the assailants packed the car with explosive material or launched grenades.

Chavez said the killings did not qualify as terrorism.

"We have no evidence anywhere in the country of narco-terrorism," he said.

The attorney general says at least 24,800 people have been killed in drug-gang violence since Calderon launched his military-led offensive in 2006.

Ciudad Juarez has become one of the most dangerous cities in the world, with more than 4,000 people killed since the beginning of 2009. Reyes said at least 14 police officers have been killed in the city and surrounding areas in recent weeks.

Chavez reiterated the government's argument that violence has surged in large part because cartels are splintered and on the defensive.

"The actions of the government are forcing criminals to modify their strategies," he said. "The strongest keep what they have, while the defeated are looking for new turf, and this means invading territories that belonged to someone else. This provokes confrontations and internal wars."

But Mexico's drug cartels have extended their reach into other criminal activities. On Friday, federal police announced that five men who allegedly worked for the Zetas drug gang had been breaking into pipelines operated by the state-owned Petroleos Mexicanos company to steal large quantities of fuel. The five men were detained at a pipeline in the Gulf coast state of Veracruz.