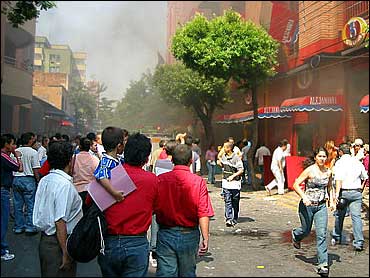 Suspected rebels set off a car bomb Wednesday in a shopping center in northeastern Colombia, killing at least seven people and wounding 20 others, authorities said.

Police Gen. Luis Alfredo Rodriguez blamed rebels of the National Liberation Army, or ELN, for the attack in Cucuta, 250 miles northeast of Bogota. The car was parked in a basement lot, police said.

The three missing Americans were captured by Colombia's main rebel group after their plane crashed on a hilltop in southern Colombia on Feb. 13. Colombian Defense Minister Martha Lucia Ramirez has said they were on an intelligence mission. A fourth American and a Colombian soldier who had been aboard the plane were shot dead by rebels.

The U.S. official emphatically denied the plane — which carried high-tech intelligence gear — was shot down as the rebels have claimed.

"The crew had a few minutes to set the plane on fire. They followed their procedures," the official said. "Some of the bullet holes that have been shown on TV are from the crew trying to ignite the fuel themselves."

Those on board, who work for a division of Northrop Grumman that is contracted by the Pentagon, are the first Americans on U.S. government business to have been captured by the Revolutionary Armed Forces of Colombia, known as the FARC.

The ELN and the FARC are battling outlawed paramilitary groups for control of Cucuta. The city, near the border with Venezuela, has one of the highest murder rates in Colombia.

Colombia is torn by a 38-year civil war that pits the leftist rebels against the government and right-wing paramilitary groups. About 3,500 people, mainly civilians, are killed in the fighting each year.