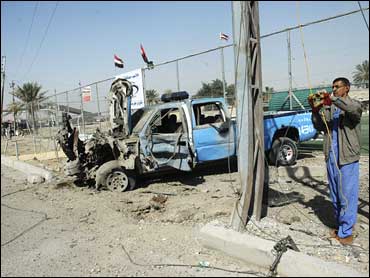 A car bomb tore through a crowded livestock market south of Baghdad on Thursday, killing at least 13 people in a mainly Shiite area where the U.S. believed the threat from extremists has greatly diminished.

The blast struck the market on the outskirts of Hillah at the height of trading, scattering human remains and animal carcasses across the dirt.

It was Iraq's deadliest attack in three weeks and showed the dangers still facing this country as the Americans prepare to withdraw by the end of 2011. In the earlier attack, a female suicide bomber killed 40 people when she blew herself up in the midst of Shiite pilgrims in nearby Musayyib on Feb. 13.

Both bombings occurred in the Babil province, in an area south of Baghdad where U.S. commanders have expressed increasing confidence in security gains following a Sunni revolt against al Qaeda in Iraq and a Shiite militia cease-fire.

U.S. forces already have turned over responsibility for Babil - mainly Shiite in the south but with a volatile mix of Sunnis and Shiites to the north - to the Iraqis.

Maj. Gen. Michael Oates, the top U.S. general responsible for southern Iraq, said last month that he believes violence in his sector had fallen to such low levels that peace is "not reversible."

But he warned the Iraqi government needs to shore up the gains by providing essential services to its people.

Facing pressure to improve services, Iraq's parliament passed a $58.6 billion budget for this year after agreeing to sharp cuts amid falling oil prices. But lawmakers then adjourned until April 14 after failing again to elect a new parliamentary speaker.

The 2009 budget was approved after political blocs reached a compromise to break a weeks-long deadlock, according to Sami al-Atroushi, a member of the parliament's finance committee.

The government's original spending proposal was about $79 billion but it already had faced an earlier round of cuts as oil prices dipped from a mid-July high of nearly $150 a barrel to under $45 a barrel.

The measure now must be approved by Iraq's three-member presidential council led by President Jalal Talabani.

All the dead and injured in Thursday's bombing were civilians, Iraqi police Maj. Muthana Khalid said.

Health officials said 60 people were wounded but three of them died after being taken to the hospital, raising the death toll to 13.

Witnesses said about 15 sheep also were killed in the attack, which occurred when a car parked near the main thoroughfare near the market exploded.

Dozens of merchants, farmers, butchers and buyers were at the market in Hamza al-Gharbi, a mostly Shiite community a short distance from Hillah, about 95 kilometers south of Baghdad, when the bomb exploded.

"We had just started to have our breakfast in a tea shop inside the livestock market when we saw huge flames rising and people started to flee the scene," said Hussein Abdul-Kadir, a witness. "We saw several bodies and carcasses, some burnt lying on the ground."

He said many people carried the wounded to their private cars to take them to the hospital.

The Hillah area has been the site of many deadly bombings, including one of the worst attacks in Iraq since the 2003 U.S.-led invasion. In February 2005, a suicide car bomber killed 125 national guard and police recruits in Hillah.

In other violence, a roadside bomb struck the car of a member of a government-backed Sunni group in southwestern Baghdad, killing him and wounding three civilians, according to police.

Many Sunni Arabs have protested Rafsanjani's trip, including hundreds who took to the streets in the Anbar province city of Ramadi on Wednesday. Iraq's Sunni Arab minority has lost the dominant position it enjoyed under its patron Saddam Hussein and is wary of the growing influence of Shiite Iran.