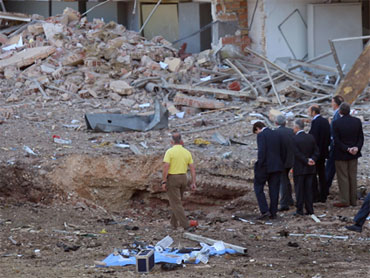 A powerful car bomb destroyed a police barracks housing officers and their families in northern Spain on Wednesday, slightly injuring about 60 people and causing major damage in the surrounding area. The attack was blamed on Basque separatist group ETA.

ETA did not phone in a warning as it typically does before most attacks, so authorities had no time to evacuate the 14-story building in Burgos, police said. There were around 120 people in the barracks and surrounding buildings, a third of whom were children, when the explosion went off at 4 a.m. (0200 GMT, 10 p.m. EDT Tuesday).

Most of the injuries were from flying glass, and 38 of the wounded were treated in hospitals, the Interior Ministry said. Officials expressed surprise no one was killed in the blast, which blew off much of the barracks' facade.

Burgos is in a province that borders the Basque region, which ETA hopes will one day become independent from Spain.

It would be ETA's eighth attack this year, further proof the militant group is still an active force despite major police crackdowns in Spain and France. Spain's government claims after each ETA arrest, including those of many leaders, that the group has been decapitated. But the attacks have continued.

Television images showed many residential dwellings around the barracks with windows and some walls blown in by the force of the explosion.

It is common for members of the paramilitary Civil Guard police force to live in barracks with their spouses and children. The force is chiefly in charge of policing rural areas and guarding official buildings.

Interior Minister Alfredo Perez Rubalcaba rushed to the scene and condemned the bombing.

"The attack aimed to cause deaths," he told reporters. "Forty-one girls and boys were sleeping and could simply have been killed in what was a major car bomb.

"This wasn't just directed at those that work in the Civil Guard, which is detestable in itself, but it was aimed at hurting their families, giving it an added repulsive aspect."

He said the best news he had was that of the nearly 60 people injured, all had been discharged from a hospital by midday.

The bomb left a crater that had filled with water from broken underground pipes. The remains of the van used in the bombing were hurled about 70 meters (230 feet) away.

The minister said the van had used false license plates and had probably been stolen in France. He said no warning call had been received, but said this was not so unusual for ETA when it attacked the Civil Guard.

Rubalcaba said it was too early to give details on the size of the bomb. News reports cited police investigators as saying it contained up to 200 kilograms (440 pounds).

Spain has vowed to crush the separatist group since ETA ended what it had said was a permanent cease-fire with a massive bombing at Madrid airport in 2006.

Rubalcaba said the "horrendous attack" showed that ETA was not only group of "murderers and savages but also crazed people. This does not make them stronger, but it does make them more dangerous."

ETA has killed more than 825 people since it launched a campaign in 1968 for an independent homeland in the Basque region of northern Spain.

The last attack blamed on the group was July 10 when a bomb exploded outside an office of the Spanish prime minister's party in the Basque town of Durango, causing significant damage but no injuries.

The group's last fatal attack took place June 19, when a bomb attached to the underside of a car killed a Spanish police detective whose job was to investigate ETA.

In an attack on May 14, 2008, ETA killed a Civil Guard officer in a car bombing outside a barracks in the Basque town of Legutiano. There were 29 people in the building at the time.

Burgos is an important regional capital and contains a historic city center with important tourist attractions.

ETA's name is a Basque-language acronym for Basque Homeland and Freedom.