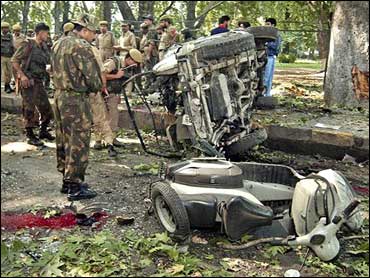 A bomber rammed an explosives-laden car into an army jeep Wednesday, sparking a blast that killed five soldiers and a civilian near a school in an elite neighborhood of Indian Kashmir's capital, police said. At least 20 people were injured.

No children were hurt inside the school in Srinagar, the summer capital of India's Jammu-Kashmir state, senior police officer Hasseb Ahmed said.

However, the blast knocked down some of the school perimeter and shattered windows in a neighborhood filled with residences of top government officials, Ahmed said.

The crushed remains of the attack car lay on the leafy avenue near shreds of flesh and the bodies of soldiers. The severely damaged army jeep lay toppled on a side. Bits of the engine, metal and glass shards and other debris lay on the blood-splattered road.

The body of the attacker hadn't yet been found, but police believed it was blown to pieces.

"The earth shook and all the window panes were shattered. I was inside and I rushed out. There was smoke everywhere. I saw the bodies," an unidentified witness told the private Channel 7.

No one immediately claimed responsibility for the attack.

Pakistan-based Islamic militants have been fighting Indian security forces in the state since 1989 to carve out a separate homeland or merge the Himalayan region into Pakistan. More than 66,000 people have been killed in the conflict.

India accuses Pakistan of aiding and arming the militants at training camps on the Pakistani side of Kashmir, a charge Islamabad denies.

Both India and Pakistan claim the divided Himalayan region in its entirety and have fought two wars over it.