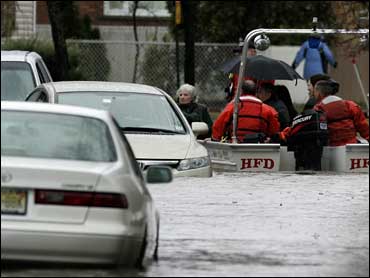 A powerful car bomb exploded in a Jewish religious neighborhood of Jerusalem late Thursday afternoon, hurling shards of metal through the air.

Despite the force of the blast, only one woman was slightly injured and nine other people were treated for shock, according to police.

A previously unknown group calling itself the Popular Palestinian Resistance Forces says it planted the bomb to send a message to Prime Minister-elect Ariel Sharon, who was elected two days ago. The group urged Palestinian leaders to sever contacts with Israel.

CBS News Correspondent Robert Berger reports the bomb exploded in a car parked near a seminary in an ultra-Orthodox district near Arab east Jerusalem, leaving a blackened and twisted shell billowing gray smoke into the sky.

"We are talking about a very large bomb. The explosion blew every piece of the car in different directions," Jerusalem police chief Miki Levi said.

"I think it was a miracle that nobody was killed," said Levi.

Shimshi Tepfer, a 19-year-old seminary student who was in a building nearby, says "the building shook a little … I thought the windows would pop out."

"What happened today is another tragic event which demands we all unite to act with determination against terror," said Sharon, at the same time making it clear that it is not up to him to determine Israel's immediate response, because Ehud Barak is still prime minister.

For his part, Barak pledged that Israel will "have to do everything possible to stop this violence and reach the perpetrators of these attacks." The bombing caught Barak in the middle of a speech to his Labor Party in Tel Aviv, at which point he rushed back to Jerusalem.

One of Sharon's confidants, legislator Limor Livnat, said the attack only strengthened the resolve of Israel's new leadership not to resume negotiations with Palestinian leader Yasser Arafat's Palestinian Authority as long as violence continues.

"Certainly, the policy now will be that there will be no negotiations while we are under attack," said Livnat. "They will be able to continue talking to us only when the attacks stop."

The blasts hit as Sharon held private meetings to form a government, while publicly, a war of words raged between high-level aides to Sharon and Arafat.

Prior to the bombing, Zalman Shoval, an adviser to Sharon, rejected the suggestion from the Palestinians that Mideast peace talks should resume where they left off, under the leadership of the Barak government.

"Everything that was spoken about or said … is not binding on Israel or any government," said Shoval, in an interview with Israel Radio.

Shoval's dismissals of proposals made during Barak's tenure sparked an angry reply from Ahmed Abdel-Rahman, an aide to Arafat.

Marzouk says the peace process gave Arabs "nothing, during ten years of negotiations."

He adds that "Sharon, like all other Israeli leaders, is not a man of peace."

Hamas has played a key role in the Intifada, the Palestinian uprising which began last fall and has claimed 385 lives in Arab-Israeli clashes, 323 of them Palestinian.

Shoval will be part of a delegation being sent by Sharon to the United States next week to discuss the peace process.

Envoys are also being sent to Europe, Egypt, and Jordan.

Palestinian negotiator Nabil Shaath says it is critical that the U.S. remain involved.

"The Americans are the sponsors of the peace process," says Shaath. "They are witnesses to all that happened. Thus, when we go back to the negotiations table, the Americans must say where we reached."

President Bush telephoned Arafat Thursday, apparently just before the explosions in Jerusalem, and urged Arafat to help stop the violence in the region.

Saeb Erekat, another Palestinian negotiator, says it's up to Israel whether peace can be achieved.

"If they want peace, we are fully ready, but our peace will not be at any price," said Erekat, in an interview on Palestinian television. "If the Israeli side in the new government thinks that we will start negotiations from point zero, this will be a strategic mistake that we will not accept."

Erekat also said any agreement must include the return of all land occupied by Israel in the 1967 Mideast war, including Arab East Jerusalem, and a guarantee of the right of Palestinian refugees to return to those areas.

Sharon has in the past rejected all such demands and in a visit to Jerusalem's Western Wall on Wednesday, he staked Israel's claim to all of the holy city for "eternity."

Syria meanwhile weighed in with its own message for the new government, saying that Israel will have to return all the territory it captured in 1967.

"We tell everybody these are our conditions for peace," says Syrian President Bashar al-Assad, interviewed by the Saudi-owned newspaper Asharq al-Awsat. "We are ready to resume negotiations with whoever can implement them."

Syria has held sporadic peace talks with Israel since 1991 but negotiations broke off a year ago in a dispute over the return of the Golan Heights, captured by Israel in 1967.