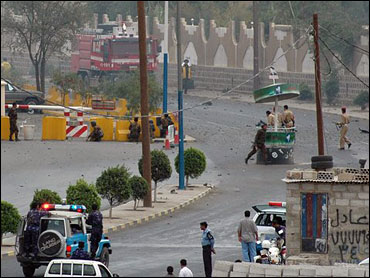 A sophisticated bombing plot carried out against the U.S. Embassy in Yemen brings increased urgency to fears that Muslim extremists are gathering strength in that nation and could make it a headquarters for terrorism.

The attack at the perimeter of the compound, which killed 16 people, including six assailants, follows a March mortar attack on the embassy and two attacks against Yemen's presidential compound in late April.

CBS affiliate WIVB in Buffalo, New York, reports that one of the dead is a U.S. citizen who was in Yemen to fill out marriage-related paperwork

The family of Susan Elbaneh, told WIVB that Susan is a U.S. citizen born and raised in Lackawanna, New York. Elbaneh was married in Yemen recently and was at the U.S. embassy to fill out paperwork to bring her husband back to the U.S. with her. She was planning to finish her senior year at Lackawanna High School.

"Yemen is rapidly re-emerging as a jihadist battleground and potential base of operations," Ted Gistaro, the national intelligence officer for transnational threats, said in a speech in August.

The extent of Yemen's problem with extremists and the shortcomings of its counterterrorism efforts are underscored by the fact that Yemenis make up the largest population of detainees - at least 108 of 270 - held at Guantanamo Bay.

The Bush administration has sought to return dozens of these prisoners to Yemen but has been unable to get assurances from the Yemeni government that they will be held or rehabilitated.

Yemen poses a frustrating problem for U.S. counterterror efforts. It considers itself a strong partner with the United States in the fight against terrorism, and U.S. officials say Yemeni intelligence services have been helpful since the Cole attack. But the poor country on the southern tip of the Arabian peninsula has a weak central government and a powerful tribal system. That leaves large lawless areas open for terrorist training and operations.

"Al Qaeda senior leaders have called for increased pressure in Yemen, and their northern territory is not under central government control," a senior U.S. military official told The Associated Press Wednesday, on condition his name not be used to discuss sensitive foreign policy issues.

Yemen has a history of being unable to hang onto terrorist suspects. U.S. officials grumble about what they call lax detention policies. Seventeen suspects in the 2000 USS Cole bombing that killed 17 American sailors were arrested; ten of them escaped in 2003. One of the primary suspects in the attack, Jamal al-Badawi, escaped jail in 2004. He was taken back into custody last fall under pressure from the U.S. government.

The fallout from that incident reinforced Washington's concerns about Yemen's commitment to fighting terrorism and led Secretary of State Condoleezza Rice to cancel a planned visit to Yemen last year for an international conference.

"Have they done a lot in the past? Yes. Could they do more? Yes, absolutely. We want to work with them to build up their capabilities at this point," said State Department spokesman Sean McCormack at a Wednesday press conference.

"There's an ongoing issue with al Qaeda and ... violent extremists and terrorism in Yemen," he said.

Rice spoke to Yemen's president Wednesday morning to express regret at the loss of Yemeni lives in the attack and to reinforce the importance of counterterrorism cooperation, McCormack said.

"We want to underscore it is critically important to work with them on matters of terrorism," he said.

Al Qaeda's history is intertwined with Yemen. Osama bin Laden's family came from Yemen. It was home to several al Qaeda training camps in the late 1990s. The USS Cole bombing was one of al Qaeda's most devastating attacks on a U.S. target before the Sept. 11 attacks.

In June 2001, Yemeni authorities arrested eight Yemenis believed to be plotting to blow up the U.S. Embassy in Sanaa. In 2002, an accidental explosion killed two al Qaeda operatives. Later that year, three American missionaries were killed in a southern Yemeni town but it is unclear if the alleged killer, a local Islamist militant, had any links to al Qaeda, according to information compiled by the Council on Foreign Relations.

The latest attack so far has not been attributed to al Qaeda, but officials say it follows the terrorist organization's playbook. The attack involved multiple vehicle-borne devises and armed personnel on foot, seemingly in an attempt to try to breach the embassy's perimeter, enter the compound and inflict further damage and loss of life.

The bombings were carefully orchestrated, with sniper fire and some attackers apparently dressed as soldiers, said a senior U.S. official who spoke on condition of anonymity to describe internal Bush administration briefings.

As many as five explosions struck the embassy, and Yemeni authorities who first responded were ambushed by snipers, said the official. He said it appeared some of the attackers were dressed as Yemeni troops and that the first Yemeni emergency personnel to arrive on the scene were hit by heavy sniper fire from gunmen who had stationed themselves across the street from the embassy.

Yemeni security officials said a little-known group called Islamic Jihad, unrelated to the Palestinian group of the same name, claimed responsibility for the attack. But Yemeni authorities have blamed the group in past attacks that have later been claimed by al Qaeda in postings on the Internet.

"It is fair to say this attack in San'aa bears all the hallmarks of an al Qaeda attack," said McCormack.