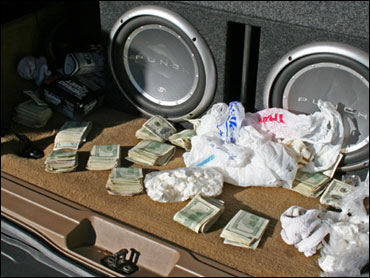 (AP Photo/Wisconsin DOJ)
Photo released in 2007 by the Wisconsin Department of Justice shows money and cocaine found in the back of the truck belonging to cocaine kingpin Coco in Watertown, Wis.

WATERTOWN, Wis. (AP) In this Midwestern town 1,500 miles from Mexico and a 40-minute drive from Madison, Wis., in a place that proudly proclaims itself the birthplace of kindergarten, Coco the cocaine kingpin flourished.

Coco came to the United States illegally, and used layers of family members and henchmen to build an operation that saturated southeastern Wisconsin with cocaine until authorities moved in. Then the players started falling — two dead in Mexico, nearly two dozen locked up in American prisons.

It's a story that echoes elsewhere. The U.S. Justice Department says more than 200 U.S. cities have seen cartel-related drug smuggling. Much has been made of Houston's gun trafficking, Phoenix's kidnappings and Atlanta's status as a drug-distribution hub.

But Coco's tale illustrates just how far from the border Mexican drug dealers set up shop, and how easily they infiltrate a town, hide in plain sight and build a lucrative operation.

"You feel that Watertown is a safe town and that you're isolated from a lot of that," said Karen Timm, 62, who lives two doors down from an apartment one of Coco's dealers used. "Now you know that you're vulnerable."

In the late 1990s, Jefferson County Sheriff's drug officers started hearing about a Hispanic drug ring moving about a pound of cocaine into the area every month.

But they couldn't get anyone to name names.

He was "just a voice," Prieve said.

Two months later, a 46-year-old drifter and suspected cocaine dealer named Arnold Wood called Madson and said he wanted to turn his life around. He talked about Coco.

Wood said he was buying up to 15 ounces of cocaine a day from Coco on Mondays, Tuesdays and Wednesdays. On Thursdays, Fridays and Saturdays, he bought up to 25 ounces a day.

He sold it all over the region. Business was so good he branched out to subcontractors.

Investigators still aren't certain where all the cocaine originated. Mexican cartels bring the drugs across the border and into hub cities such as Houston and Atlanta to be shipped out. From there it filters down through many distributors.

State Justice Department Special Agent Jim Engels, who helped Madson's task force on the case, said investigators could never establish a connection between Coco and the cartels. Their goal was far more immediate: clean up Watertown.

"The ultimate goal was to make a local impact, to get Coco and his group," Engels said. "The bottom line is this is where it (cartel cocaine) ends up."

But investigators struggled to connect the pieces.

Prieve was still buying drugs. Runners would show up, get in his car, give him the cocaine and leave within seconds.

Only 5 percent of the population in this town of 25,000 on the banks of the Rock River is of Hispanic descent, largely migrant workers who earned permanent jobs in nearby dairy farms and a cheese plant. But Coco knew how to blend in.

There were no shootings, no fancy mansions, no flashy cars. His gang drove old Impalas, Jettas and Camrys. Many lived in ramshackle apartments scattered around town, including one just across the street from the Kids Palace day care center.

Deborah Hockman and her three children lived next door to Coco's brother, Efrain, but had no idea what he did for a living.

"They had little kids who came over and played with our kids," Hockman said. "Nothing ever made us think, 'Oh, they're druggies."'

Coco himself drove a 1998 Chevy Blazer and lived in a sprawling brick apartment complex off Main Street. The only sign something was afoot? People stopped outside the apartment for a few minutes, sometimes in cars with tinted windows, and then left, said neighbor Pam Hearron.

The ring was building a base of middle-class buyers — men, women, whites, Hispanics.

They did 20 deals a day in broad daylight in parking lots, Madson said. When darkness fell and the stores closed and the lots were empty, they stopped answering their phones for fear their meetings would stand out. They never did business before 2 p.m. on Sundays, Madson said.

"They were just part of the scenery," he said.

The detectives watched, taking photographs and noting runners' cars. Officers waited for a reason to pull them over, then identified them and got addresses. They scoured apartment contracts trying to find out who lived with them. 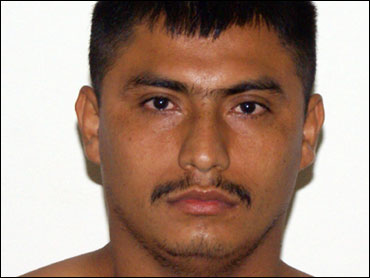 (AP Photo/Wisconsin DOJ)
Photo of Maximo Pineda Buenaventura released in 2007 by the Wisconsin Department of Justice.

Pineda was an illegal immigrant from Pandacuareo, a remote mountain region in the Mexican state of Guerrero known as "Tierra Caliente" for its steamy climate. The region, heavily patrolled by the Mexican military, has been plagued by drug-war violence in recent years.

For his ring, Pineda had enlisted the help of his brothers, Efrain and Teodulo, an array of other extended family members and friends from Pandacuareo.

After weeks of undercover drug buys and surveillance, Engels and the team asked federal prosecutors in Madison for permission to tap the phones of drug ring members.

They were getting close. Prieve didn't know it at the time, but Coco had actually appeared at a deal and sat next to him.

But before the wiretaps could begin, everything nearly came apart. Prieve's contacts told him Coco had left for Mexico — gone to build a house.

Starting in February 2008, investigators spent as much as 12 hours a day, seven days a week, in the wiretap room, listening to five phones they'd identified through Prieve or by cross-referencing incoming calls. They estimate they intercepted 8,000 calls.

The hours took their toll. Madson had committed two members of his four-man drug task force to the Coco case full time for months, putting other cases on the back burner. The team talked at least three times about shutting down and arresting the players still in the area.

Patience, Engels said. Even though Coco was gone, the wiretaps were connecting more people.

And then Coco returned.

Before he'd left for Mexico, Coco had turned the business over to Efrain and his brother-in-law, Servando Herra Vazquez. But Efrain had his own cocaine business in Watertown; he didn't devote as much attention to Coco's customers, so Coco's income dwindled. Then one of their chief runners got arrested on an outstanding warrant.

Soon the detectives were listening in as Efrain made arrangements to get Coco and his family smuggled back across the border. By mid-May, he was back in Watertown.

Coco took his phone back and revved up business, as agents listened in.

"Everything was matter of fact," Madson said. "'What do you want? Here's the price. Ten minutes.' Good coke dealer. Not paranoid. Very comfortable. Very confident."

The exhausted detectives were at a crossroads. They could keep trying to piece together Coco's web. Or they could make their move.

On June 19, 2008, more than 120 police officers fanned out across Watertown and Dodge and Rock counties with about a dozen search warrants.

Hearron, who lives across the street from Coco's apartment complex, remembers police and drug dogs storming inside.

"Oh my God," Hearron remembered thinking. "What did they find over there?"

Back at the command post, Madson was asking himself the same question.

Slowly, the phone calls came in. The tally by the end of the morning: $112,000 seized in cash, including $59,000 hidden in the engine block of Coco's Chevy Blazer; about 2,460 grams of cocaine, hidden in a Special K cereal box and soda cans; a .22-caliber handgun at Efrain's apartment; a .357 handgun at Coco's apartment.

And the big one — Coco in cuffs.

All without a shot fired.

The repercussions were felt 1,500 miles away.

Gerardo Pineda Soria, arrested with about 800 grams of cocaine in his apartment, gave detectives a description of his supplier, according to his attorney, William Jones.

In February, a group of 10 people shot Pineda's brother, Cecilio, to death at a gas station in Zirandaro de los Chavez as Cecilio's 13-year-old daughter looked on, police said.

Several months later, Pineda's cousin, Jose Cruz Garcia Soria, was kidnapped from his truck. He was found dead by a river in Mexico, Jones said. Someone had tied his hands and beat him.

Twenty-one people have been charged in U.S. District Court. Four of those remain fugitives. Those in custody reached plea deals with prosecutors and got sentences ranging from six months to 17 1/2 years.

Coco's attorney, Jonas Bednarek, argued for leniency. He told U.S. District Judge Barbara Crabb that his client quit school in Mexico when he was 11 or 12. Coco wasn't the ringleader, he claimed. His associates set up their own deals.

"I never thought that the penalties were so harsh for this and I will never ever do it again," Coco told Crabb. The judge didn't buy it and sentenced him to 17 1/2 years.

"You made cocaine available to all kinds of people that had an effect on lives that rippled way beyond yours," the judge told him.

Life goes on in Watertown — Farm Technology Days, swim lessons, T-ball. But Pam Hearron said the city has changed. She's taken to locking her doors and tailing her 3-year-old grandson wherever he goes.

"It makes me angry and sad," she said. "It's almost like you lose a piece of freedom you once had. ... That's kind of scary."