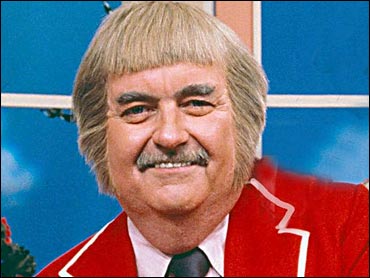 Keeshan died of a long illness, his family said in a statement.

Keeshan's "Captain Kangaroo" premiered on CBS in 1955 and ran for 30 years before moving to public television for six more. It was wildly popular among children and won six Emmy Awards, three Gabriels and three Peabody Awards.

"Throughout 'Captain Kangaroo's' historic 29-year run on CBS, Bob entertained millions of children across the country. He was a great entertainer, showman and innovator and he will always hold a special place in the history of CBS and the hearts of television viewers. Our condolences go out to his family and friends," said Moonves.

"Keeshan, I think, has a tremendously important place in the history of children's television," Washington Post television critic Tom Shales told CBS Radio News. "It's a pity there weren't more shows like his.

"Bob Keeshan almost single-handedly was a forerunner to all the children's programming that's so acclaimed now," Shales added.

The format was simple: Each day, Captain Kangaroo, with his sugar-bowl haircut and uniform coat, would wander through his Treasure House, chatting with his good friend Mr. Green Jeans, played by Hugh "Lumpy" Brannum.

He would visit with puppet animals, like Bunny Rabbit, who was scolded for eating too many carrots, and Mr. Moose, who loved to tell knock-knock jokes.

But the show revolved about the grandfatherly Captain Kangaroo, whose name was inspired by the kangaroo pouch-like pockets of the coat Keeshan wore.

"I was impressed with the potential positive relationship between grandparents and grandchildren, so I chose an elderly character," Keeshan said.

"Unlike many other children's programs, Captain Kangaroo was not filmed before a studio audience and did not include children in its cast," says the Museum of Broadcasting on its Web site.

"Keeshan wanted nothing that would come between him and the children in his television audience and so spoke directly to the camera. He also personally supervised which commercials could air on the program, and promoted products, such as Play-Dough and Etch-a-Sketch, which he saw as facilitating creative play, while avoiding those he felt purely exploitative."

Keeshan, born in Lynbrook, N.Y., became a page at NBC while he was in high school. He joined the Marine Corps in 1945.

His first television appearance came in 1948, when he played the voiceless, horn-honking Clarabell the Clown on the "Howdy Doody Show," a role he created and played for five years.

Later he played Corny the clown, the host of a noontime cartoon program in New York City.

Keeshan, who moved to Vermont in 1990, remained active as a children's advocate, writing books, lecturing and lobbying on behalf of children's issues.

He was critical of today's TV programs for children, saying they were too full of violence. And he spoke wherever he went about the importance of good parenting.

"Parents are the ultimate role models for children," he said. "Every word, movement and action has an effect. No other person or outside force has a greater influence on a child than the parent."

When Fred Rogers, the gentle host of "Mister Rogers' Neighborhood," died last year, Keeshan recalled how they often spoke about the state of children's programming.

"I don't think it's any secret that Fred and I were not very happy with the way children's television had gone," Keeshan said.

In 1987, Keeshan and former Tennessee Gov. Lamar Alexander co-founded Corporate Family Solutions, an organization that provided day-care programs to businesses around the country.

Keeshan believed children learn more in the first six years of life than at any other time and was a strong advocate of day care that provides emotional, physical and intellectual development for children.

"Play is the work of children. It's very serious stuff. And if it's properly structured in a developmental program, children can blossom," he said.

Keeshan's wife, Jeanne, died in 1990. He had three children.

Guillermo del Toro on bringing "Pinocchio" to life, one frame at a time
Thanks for reading CBS NEWS.
Create your free account or log in
for more features.
View CBS News In
CBS News App Open
Chrome Safari Continue
Be the first to know
Get browser notifications for breaking news, live events, and exclusive reporting.