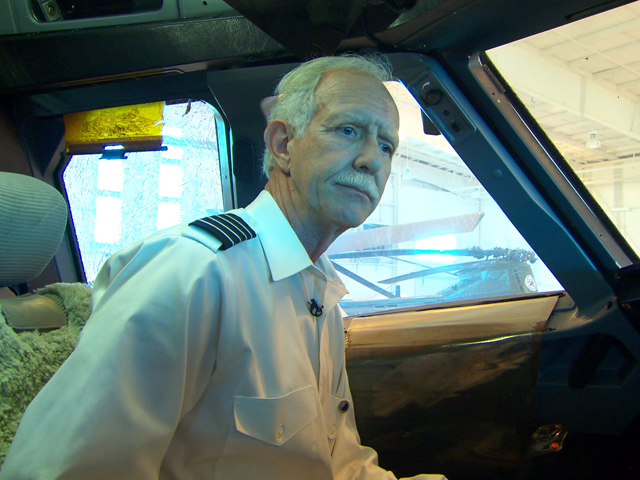 CHARLOTTE - They say that sometimes getting there is half the fun. As CBS News correspondent Steve Hartman reports,  a recent flight from Miami to Charlotte was filled with equal parts fun and nostalgia.

The flight was a joyride from Miami to Charlotte on a 1958 Eastern Airlines DC-7. It's one of the last of the legendary "propliners" still around. Airline enthusiasts from all over the world jumped at the chance to go for a spin. One of those excited to be on board the flight was retired Capt. Chesley "Sully" Sullenberger - the pilot who safely landed U.S. Airways Flight 1549 into the Hudson River in 2009.

PICTURES: Miracle on the Hudson pilot returns to famous plane

Sullenberger says just being a passenger on this plane is a career highlight - which for him is saying something."It's something I've always wished I could do and thought I would never be able to."

For Sullenberger it's a dream that dates back more than 50 years. As a kid he used to build model planes. The DC-7 he built, was an absolute favorite. It didn't fly - but it sure took him places. "I had this romanticized, idealized view of what it must be like to be an airline pilot and to go to exotic destinations and take people places they needed to go."

Eventually, of course, something happened that took a lot the romance out of flying for Captain Sullenberger. When the airlines ditched good service -- when fine dining made way for bad food made way for no food - when passengers became cattle - Sullenberger says a great deal was lost. Which is why this isn't just a plane to him. "This DC-7 is a time machine. It's a way of reliving, in some small way, the glamour of a more genteel age."

The flight obviously had no shortage of glamour and glory. It arrived in Charlotte to much adieu and parked outside the Carolinas Aviation Museum. The museum just so happens to have Sullenberger's fated Flight 1549. So we went in it together. It was his first time since that day.

"The cabin is intact," Sullenberger sais. "Only one overhead bin I saw broken." For Sullenberger, being in here was whole different kind of nostalgia - although not in a bad way. "It just makes me think how well the evacuation went and we got everybody out of each of these seats."

Even in the captain's chair, Sullenberger was as stoic this time as he was last. He says, this plane just shows how much safer equipment and procedures are today. "It did its job."

He says it may be nice to go back in time - but you wouldn't want to stay there. The golden era of air travel may have offered more leg room - but what really matters, especially around the holidays, are those outstretched arms.