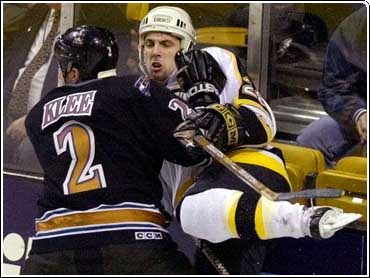 Despite being outshot, outplayed and even outhustled for most of the game, the red-hot Washington Capitals somehow managed to steal a point.

Craig Billington stopped 49 shots and Ken Klee scored with 3:54 left in regulation to give Washington a 2-2 tie with the Boston Bruins on Tuesday night.

"We weren't focused in front of Billington and he did a great job of controlling rebounds," Washington coach Ron Wilson said. "We couldn't get going and it was probably because of the layoff.").

"It was disappointing," Boston defenseman Ray Bourque said. "We got plenty of shots and a lot of them were quality. But you have to give Billington a lot of credit. He played well."

Billington filled in for Olaf Kolzig, who got a rest after starting the last 19 games and also playing in the All-Star game on Sunday in Toronto.

Billington was making just his eighth appearance of the season, including a 3-0 shutout of the Bruins on Nov. 20.

Dave Andreychuk gave Boston a 2-1 lead when he tipped Anson Carter's pass through Billington's pads with 34 seconds left in the second period. It was Andreychuk's 19th goal of the season.

Klee scored his fourth of the season when he beat goalie Byron Dafoe with a one-timer from the slot off Richard Zednik's pass.

Boston had a power play for the final minute in regulation and the first minute of overtime, but was unable to get quality chances.

The Bruins have earned a point in 11 of their 12 last games, but are only 4-3-5 in that span. They have also racked up a league-high 15 ties this season.

"That is an extraordinary number," Boston's Don Sweeney said. "We can certainly find positives out of the game, but you look at the outcome and they got a point and are happy while we should be unhappy we didn't get an extra point."

With the point, Boston moved into a tie with idle Pittsburgh for the eighth and final playoff spot in the Eastern Conference.

Boston jumped to a 1-0 lead 2:58 into the second period on Andre Savage's third goal of the season. Savage scored on a power play, knocking a rebound of Bourque's shot past Billington.

"We certainly got on top quick, but we didn't finish," Bruins coach Pat Burns said. "I liked everything I saw."

Sergei Gonchar tied it for the Capitals midway through the second when he beat Dafoe for his 15th goal of the season. Joe Sacco and Jim McKenzie assisted on the play.

Despite being outshot 20-2 in the first period, Washington managed to go into the second period in a scoreless tie.