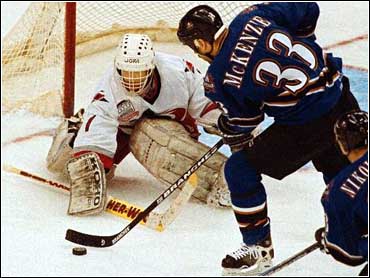 The injury riddled Carolina Hurricanes remain positive a playoff spot is attainable following a 1-1 tie against the Washington Capitals on Monday.

"I like our game as of late," Carolina captain Ron Francis said, noting the team's 8-5-1 record since a five-game skid a month ago. "The guys are doing the little things that we need to be successful. We're forechecking and throwing a lot of shots on net.

"The bottom line is if you don't earn it yourself you're not going to get that chance. It's up to us."

Ken Klee deflected a shot past Arturs Irbe with 8:29 left, giving the Capitals the tie.

"You're trailing with less than 10 minutes to go and you come up with a point, that's huge," Washington coach Ron Wilson said.

Carolina extended its unbeaten streak in overtime to 16 straight, dating to last season (3-0-13), and moved within one point of the New York Rangers for the eighth and final Eastern Conference playoff spot.

It was the third time this season the Hurricanes have blown a one-goal lead late at home to either tie or lose, but coach Paul Maurice wasn't upset, saying his team played a solid game.

"We're a point out of the playoffs," Maurice said. "Two weeks ago, we were four or five out. These next five or six games we've got to find a way to split, then we'll be in good shape."

Carolina played without three top players because of injuries Sami Kapanen (shoulder), Gary Roberts (groin) and Glen Wesley (eye). The Hurricanes also lost defenseman Steve Halko late in the third when he got slashed on his right forearm, opening a gash close to a vein.

"There has to be a lot left in the tank, there's no tomorrow," Paul Coffey said of the playoff run. "This time of year you've got to play no matter what. It's worthwhile in the end."

Washington improved to 15-3-3 in its last 21 games. Olaf Kolzig made several key saves in overtime, including one on Rod Brind-Amour from in close with 10.2 seconds left.

"I thought he was excellent," Maurice said of Kolzig, who stopped 32 of 33 shots. "There were a couple of tips - that he closed down in short order that were very hard. Some of them were just based on his size. He's so agile for a big man."

The Capitals, playing for the third time in four days, didn't capitalize on any of their five power play chances in regulation in a tight-checking game.

"There was a lot of slashing, hacking stick work," Maurice said. "It was a grinding game. You couldn't play 82 of those."

Washington tied it when the teams skated 4-on-4 with Sean Hill of Carolina and Joe Murphy of Washington off for roughing. Klee scored his fifth of the season, breaking toward the slot and tipping in a shot from Richard Zednik.

Francis made it 1-0, deflecting a shot by Coffey from the left point past Kolzig 7:23 into the game for his 18th goal of the season, and moving within two of his 18th season of at least 20 goals.