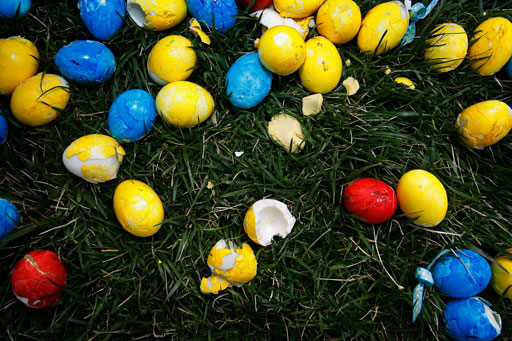 Unfazed by the pressure of playing in her first Grand Slam final, Capriati upset top-seeded Martina Hingis 6-4, 6-3 on Saturday to win the Australian Open.

It was the most captivating moment in a tumultuous career for Capriati, the former child prodigy who left the women's tour in the mid-1990s because of drug and personal problems.

Capriati, 24, entered the tournament seeded 12th and might be the most improbable women's Grand Slam champion since the Open era began in 1968. She beat defending champion Lindsay Davenport and four-time champ Monica Seles en route to the final, then outplayed Hingis from the start.

When Capriati closed out the victory by slamming a backhand return winner on the first match point, she hopped up and down, grinned and cried with joy.

"I just couldn't believe it," she said. "I got the chills. I just thought, `Wow, the moment has finally come. Now I can enjoy it.'"

Capriati clasped her hands behind her head, thrust her fists in the air and trotted over to her father and coach, Stefano. He happily rubbed her right arm the one that had just delivered a Grand Slam title. Then she went back to her changeover chair and phoned her brother back home in Florida.

"Who would've thought I would have ever made it here after so much has happened?" Capriati told a supportive center-court crowd during the trophy ceremony. "Dreams do come true if you keep believing in yourself. Anything can happen."

On a gorgeous, cloudless day, Capriati was as perfect as the weather at the outset, racing to a 4-0 lead in just 12 minutes. She slugged boldly from the baseline but was accurate, too, playing 25 points before she hit a shot long.

"I thought, `Why be nervous? She has everything to lose. Just go for it,'" Capriati said.

Her newfound fitness was often evident. She repeatedly ran down Hingis' drop shots, including on the final point of the first set, when she raced forward and bunted a backhand winner into the corner.

Capriati was a big underdog but the sympathetic favorite, and the crowd was clearly on her side, with fans shouting out encouragement to her between points. Stefano Capriati watched nervously from under a red, white and blue USA hat, grinning and shaking his fist when his daughter hit a winner.

By the second set, Hingis' frustration was increasingly evident. In the second game, after barely ticking Capriati's serve, Hingis hurld her racket to the court and kicked it in anger.

Hingis double-faulted on break point to fall behind 3-2, and Capriati's serve - her downfall in the past - held up the rest of the way.

The loss was especially bitter for Hingis, who was bidding for her sixth Grand Slam title but her first since winning the 1999 Australian Open. She beat Serena and Venus Williams en route to the final, but lost for only the second time in 35 matches at Melbourne Park since 1997.

"It ended not the way I wanted," Hingis said. "But I gave it my best."

The loss was Hingis' first to Capriati in their six meetings.

"I hope to be in many more finals with you," Capriati told Hingis during the trophy ceremony. "You've had lots of times here, and I'm glad I finally got to be in one."

Capriati ranks with the most unlikely of Grand Slam champions. The only unseeded champ in the Open era was Chris O'Neil, who won the Australian Open in 1978, when many top players skipped the tournament. The lowest seeded champion previously was Iva Majoli, who won the 1997 French Open when seeded ninth.

Capriati will climb to seventh in next week's rankings, the first time she has been in the top 10 since Jan. 16, 1994, when she was ninth.