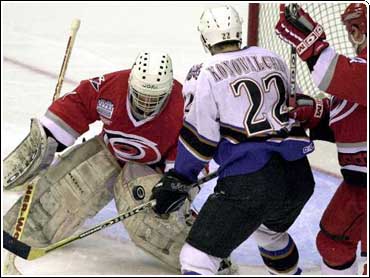 It seemed the breaks weren't going the Washington Capitals way for a change. Then Paul Coffey's subtle mistake allowed the winning goal, and the Caps tied a franchise record with their eighth consecutive home victory.

Coffey stuck out his leg in an attempt to block Uhf Dahlen's slap shot from high in the slot. Instead, Coffey deflected the puck enough to throw off goaltender Arturs Irbe as the streaking Capitals defeated the Carolina Hurricanes 2-1 Thursday night.

"He wanted to help me," Irbe said. "It was an unfortunate situation to make that kind of interference. I thought I had it for sure, and it snaked past my glove. Those plays are the toughest to swallow."

"It drives goalies nuts when defensemen try to play goalie like that," Kolzig said. "Just stand there and let the puck hit you. Don't try and move out of the way or try to kick it aside. That just creates more havoc for the goaltender."

"There are some games where we haven't been playing great, but we've been winning the games," Dahlen said. "That's the sign of a good team."

The Capitals dominated this game, outshooting the Hurricanes 34-24, but had twice put the puck in the net when it didn't count. Dahlen and Sergei Goncar had goals disallowed.

"We kept pressing," said Kolzig, who had 23 saves in his 18th straight start. "We didn't let it get us down. It's a good character sign. We could have easily have dragged our lips and said it's not meant to be tonight."

The Capitals are 11-1-1 in their last 13 games. They are unbeaten in 11 games at home (9-0-2) and have failed to gain a standings point in only three home games all season.

The Capitals play seven of their next eight on the road.

Jim McKenzie scored in the second period for the Capitals, his first goal since joining the team two weeks ago. Gary Roberts scored for the Hurricanes in the first.

But the near-goals were just as exciting as the goals.

Early in the second period, Dahlen raised his arms when he stuffed the puck in the net by pounding repeatedly against Irbe's skate. The on-ice officials ruled the puck didn't cross the line, and a video review upheld the call.

Another potential goal on a power play was disallowed when Peter Bondra skated across the crease and interfered with Irbe, causing the goalie to fall just before Gonchar's shot found the net.

"We had to score four goals to win the game tonight," Washington coach Ron Wilson said. "They definitely blew the Uhf Dahlen goal. That was a good six inches over the goal line. We hung in there and didn't let a little adversity like that bother us. Maybe in the first month of the season we wouldn't have survived something like that."

The Hurricanes also had a near-goal when Sami Kapanen's shot got past Kolzig's glove, only to be cleared off the line by Andrei Nikolishin.

The Hurricanes scored first on a power play 12:39 into game when Roberts deflected Coffey's slap shot from the left point.

The Capitals tied it at 3:22 of the second on McKenzie's first goal since he was claimed off waivers from Anaheim on Jan. 20. With an extra man on the ice because of a delayed penalty call, McKenzie put in the rebound off a shot by James Black.

Late in the game, Black broke his left leg. He will miss 4-6 weeks.

The Hurricanes, at the start of a five-game road trip, have lost eight of their last 12.

"We will try to play all three periods like we did the first," coach Paul Maurice said. "It's like we were chasing the whole night."