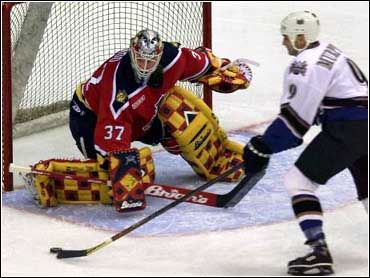 Chris Simon and the Washington Capitals put on a show for new minority owner Michael Jordan.

With Jordan in attendance for the first time since buying into the Capitals and the NBA's Wizards, Simon scored a power-play goal 55 seconds into overtime to give Washington a 3-2 victory over Florida on Wednesday night. The Caps have won 10 straight at home.

"Psychologically the win did a lot for us. We completely dominated them," Capitals coach Ron Wilson said.

Washington pulled within three points of the Panthers in the Southeast Division. The Panthers, who have lost three straight, earned a point for the regulation tie.

Washington's overtime power play was set up when Florida's Peter Worrell received a two-minute minor with 12 seconds remaining in regulation for elbowing Richard Zednik in the head. Worrell also was given a 10-minute misconduct.

"He hit with his shoulder and followed with his elbow. It was a gutsy call going into overtime," said Washington goalie Olaf Kolzig, who made 21 saves for his 100th NHL victory. "If he hadn't called it, it could have looked bad the other way."

"It was a joke," he said. "I throw a shoulder and I'll probably get suspended for throwing a shoulder, a clean hit."

Washington outshot the Panthers 44-23, but found themselves behind 2-1 when Viktor Kozlov converted a penalty shot midway through the third period. Kozlov split two Washington defenders before he was pulled down from behind by Joe Reekie, which resulted in the penalty shot.

The Capitals tied it at 2 with 3:28 remaining when Steve Konawalchuck blindly pushed the puck between his legs to beat goalie Trevor Kidd. Kidd, who finished with 41 saves, was playing in his first game since injuring his shoulder in mid-December.

"This might have been the biggest game of the year," Kidd said "The loss in overtime, it is really frustrating."

The Capitals were able to contain Pavel Bure, who entered the game with an NHL-high 42 goals. Bure was held to three shots, all in the first two period.

Washington's Joe Murphy opened the scoring at 3:10 of the first period. Adam Oates pushed a centering pass from the corner to Murphy, who was able to slide the puck under Kidd. The goal was Murphy's eighth of the season, and his first for Washington.

The Panthers tied it at 9:34 of the first period on Ray Sheppard's power-play goal. Sheppard one-timed a slap shot past Kolzig from just inside the left point.