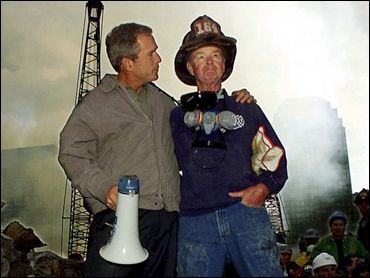 
Security — both national and economic — will be the key issues in 2004, Karl Rove told the American Society of Newspaper Editors meeting in New Orleans last week. "The election will be fought out over the security of the country and the security from threats. I don't think either one will dominate to the exclusion of the other," Rove said

Rove listed the big domestic issues — economic growth, improving education, reforming Medicare and health care and, of course tax cuts. But the man who in January of 2002 forecast the political leverage the President had on the war against terrorism made it clear that they were going to keep foreign policy in their quiver for 2004. "When this war ends, we will still have a very dangerous enemy in the form of international and transnational terrorism," Rove told the editors.

When the Republicans chose New York City over the key electoral state of Florida as the place for their 2004 convention, it sent a clear message that they decided that George W. Bush, the world leader in time of crisis, was the image they wanted to dominate the reelection campaign. It's a risk. New York is an overwhelmingly Democratic city and it held some of the biggest anti-war demonstrations before the Iraq War. And bypassing Florida might prove to be a big mistake. But White House advisors have a visceral belief in that picture of George W. Bush with the bullhorn.

Presidential message guru Karen Hughes calls it the defining moment of Mr. Bush's presidency. Aides say that his words "I can hear you. The rest of the world hears you and the people who knocked these buildings down will hear all of us soon," are the Bush equivalent of Ronald Reagan's "tear down that wall."

Democrats, who were divided on the use of force in Iraq, have seized on the issue of homeland security as a way to get a toehold into the set of new issues which have dominated American public policy since September 11, 2001.

All of the Democratic presidential candidates have criticized the Bush administration for not spending enough on homeland security. Former Senator Gary Hart, who co-chaired the U.S. Commission on National Security for the 21st Century, used the lack of preparedness to handle potential terrorist attacks as his justification for opposing military action in Iraq. Connecticut Senator Joe Lieberman used his position on the Governmental Affairs Committee to articulate the need to create the Department of Homeland Security. The issue has become a typical Democrat-Republican split, with the Democrats using it as a glorified public works program while the Republicans have seen it as a way to give more clout to the military and espionage organizations.

Security has become the political buzzword and the panacea to allay fears which have been stoked by the politicians and the media. Before the brouhaha over his acceptance speech at the Academy Awards, producer Michael Moore and his documentary "Bowling For Columbine" had been making some powerful points about the preeminence of fear in American society. The bottom line for Moore in the film was that the reason for the disproportionate number of guns in the U.S. was an excess of fear, a paranoia out of proportion to the threat.

Barry Glassner, in his 1999 book "The Culture of Fear," makes the same point on an even wider scale. He sees fear as a pathology sweeping America, overburdening citizens with anxieties about the wrong things, a profound emotion which has been manipulated by politicians and the media. Glassner says Americans are unrealistically afraid of violent crime, drugs, minorities, monster moms, mutant microbes, plane crashes, et al, and blames the media for hyping these issues for their emotional impact. SARS is the latest example of this phenomenon.

It's time our public officials be taken to task for their use of fear as a way to justify their policies and, even worse, as a way to get votes. Lyndon Johnson's "Daisy Ad" was widely panned in 1964, but this year's crop of candidates are shameless about using the public panic after 9-11 and the anthrax episodes as a way to seize the limelight.

The responsible way to deal with an insecure and fearful citizenry is to examine the rational basis for those fears. Solutions from duct tape to billions more in tax dollars for public safety and the military need to be evaluated through a public dialogue on how realistic those fears are in the first place and whether we may just have to learn to accept a certain level of risk.

In 1933 President Franklin Delano Roosevelt told Americans that the "only thing we have to fear is fear itself." As the presidential debate begins, an honest discussion of Homeland Security needs to begin with the role of fear and how to deal with it — rather than gimmicks to exploit it for political gain.