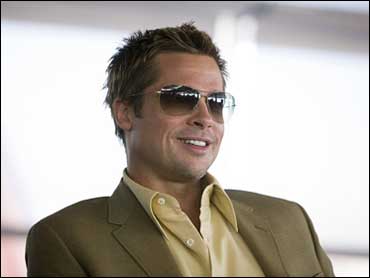 The paint is almost dry, the red carpet is being unfurled, the stars are ready to glitter.

The 60th annual Cannes Film Festival opens Wednesday as a celebration of celluloid and celebrity, with a lineup ranging from George Clooney and Angelina Jolie to Michael Moore and Quentin Tarantino.

Hong Kong director Wong Kar-wai — a long-standing Cannes favorite — opens the festival Wednesday with "My Blueberry Nights," his first English-language film and the acting debut of singer Norah Jones, who stars as a heartbroken waitress alongside Jude Law, Natalie Portman and Rachel Weisz.

Wong is joined by several other returning Cannes veterans — four of the 22 directors competing for the coveted Palme d'Or have won the top prize before. Tarantino's gory "Death Proof" is in the running, as are the Coen brothers' Rio Grande thriller "No Country for Old Men," Gus Van Sant's "Paranoid Park" and "Promise Me This," from Sarajevo-born Emir Kusturica.

A further 13 entries are by directors who have never been in the main competition before.

2Moore will not be taking home a second Palme d'Or to match the one he won for "Fahrenheit 9/11" in 2004. "Sicko," his documentary taking the pulse of the U.S. health care system, is getting its world premiere in an out-of-competition slot. But it has already generated more attention than any film in the festival, thanks to a U.S. Treasury Department investigation into a trip Moore took to Cuba — accompanied by a group of ailing Sept. 11 rescue workers — during the making of the film.

The investigation spurred producers to spirit the negative of the film outside of the United States in case the government tried to seize it, said Harvey Weinstein, whose Weinstein Co. is releasing "Sicko."

"It was like a middle-of-the-night operation from a spy novel, moving your negative to another country," he said.

Between Wednesday and May 27, the red carpet on Cannes' beachfront Croisette will glitter with celebrities. Clooney is due to promote caper threequel "Ocean's Thirteen," Leonardo DiCaprio brings environmental documentary "The 11th Hour," and celebrity super-couple Brad Pitt and Jolie are expected to be on hand — he for "Ocean's Thirteen," she for "A Mighty Heart," in which she plays the widow of slain journalist Daniel Pearl.

Among the most-anticipated films are "Persepolis," an animated adaptation of Marjane Satrapi's graphic novel about growing up after Iran's Islamic revolution; "The Edge of Heaven" by Turkish-German director Fatih Akin; "The Man From London" by Hungary's Bela Tarr; and Mexican director Carlos Reygadas' Mennonite melodrama "Stellet Licht" (Silent Light).

"Cannes has always tried to blend high art and blockbuster films," said Mike Goodridge, U.S. editor of trade magazine Screen International. That winning formula — and a glamorous Riviera location — have made it, he said, "the ultimate film festival."

Cannes has always been special. Founded in 1939 as an alternative to the fascist-dominated Venice Film Festival in Mussolini's Italy — and almost immediately canceled due to the outbreak of World War II — Cannes came to symbolize international glamor in the years after the war. Grace Kelly graced the corridors of the elegant Carlton hotel, and Brigitte Bardot caused a sensation on the red carpet.

Cannes manages to blend glitz and artistic credibility in a way no other film festival does. Past winners of the top prize include some of the most acclaimed films of all time — "Rome, Open City," "Taxi Driver," "Apocalypse Now" — as well as a few that are best forgotten.

The 12-day film feast includes some lighter fare, from DreamWorks' animated "Bee Movie" to self-explanatory rockumentary "U23D." Then there are the hundreds of out-of-competition shorts, shoestring features and student films, including the memorably named "The Golden Nazi Vampire of Absam: Part II — The Secret of Kottlitz Castle."

The hardiest film fans had already staked out prime star-spotting turf on Tuesday.

Beatrice Eon, 42, traveled from Saint-Lo in northwestern France for a second year to secure her place across from the red carpet. She didn't know what stars she would see — and didn't much care. She was there to absorb the magic of Cannes.