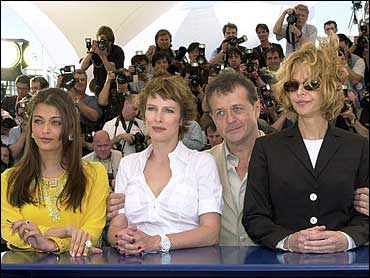 The Hollywood touch may be a bit lighter at this year's Cannes Film Festival, with a lower-key lineup of American films and only one big studio showcasing its movies.

Monica Bellucci, a co-star in "The Matrix Reloaded," officially opened the festival, introducing Cruz, Perez and the Cannes jury. The "Matrix" sequel debuts in the United States and about 20 other countries Thursday, and is playing at Cannes the same night.

Opening ceremonies included an avant-garde dance tribute to the head of the jury, French director Patrice Chereau, and his films, which include "La Reine Margot" and "Intimacy."

"Our work for 12 days is to love films and defend them," Chereau said of the festival, which runs through May 25.

Kidman, fresh off her best-actress win at the Academy Awards for "The Hours," will be back at Cannes this year with a far less flashy film than "Moulin Rouge." She stars in the 1930s-era tale "Dogville" from director Lars von Trier, who specializes in somber drama. Von Trier's "Dancer in the Dark" won top honors at Cannes three years ago.

This year's festival gets its biggest Hollywood jolt with Thursday's screening of the Wachowski brothers' "The Matrix Reloaded," the eagerly awaited sci-fi sequel.

Among the 20 films in the festival's main competition, Hollywood studios have a generally lower profile than other recent years at Cannes.

Along with "The Matrix Reloaded," out-of-competition U.S. films this year include Cameron's Titanic documentary "Ghosts of the Abyss."

The U.S. lineup the previous two years packed more celebrity punch with such films as Jack Nicholson's "About Schmidt" and "The Pledge"; Adam Sandler's "Punch-Drunk Love"; the Coen brothers' "The Man Who Wasn't There"; Sandra Bullock's "Murder by Numbers"; David Lynch's "Mulholland Drive"; Francis Ford Coppola's "Apocalypse Now Redux"; and the animated flicks "Shrek" and "Spirit: Stallion of the Cimarron."

Usually, the Cannes schedule includes films from three or four major Hollywood studios, but Warner Bros. is the only one represented in this year's main competition.

While there was early speculation that strained U.S.-French relations over the Iraq war might prompt some of Hollywood's usual suspects to steer clear of Cannes, industry executives say it was mere coincidence that fewer American studios were included.

"I don't think so at all. If you have the product and feel it's the right platform for you, you go for it," said Dan Fellman, Warner Bros. head of U.S. domestic distribution.

Gilles Jacob, festival president, said the lighter studio presence was due to a perennial issue at Cannes: the timing is "not suitable to the big American releases." In May, Hollywood studios are scrambling to finish their summer popcorn movies, while many fall prestige films more likely to fit the Cannes bill simply are not finished.

Warner, which is handling U.S. distribution for Schwarzenegger's "Terminator 3: Rise of the Machines," also will benefit from that movie's Cannes exposure as partner studio Sony brings the star and cast mates to town for publicity events.

Jacob said Schwarzenegger's appearance, along with Eastwood, Cameron and other celebrities including Cannes jury members Meg Ryan and Steven Soderbergh, "make us proud and confident in the long-lasting friendship between Hollywood and Cannes, regardless of the events taking place around the world."
Written by David Germain