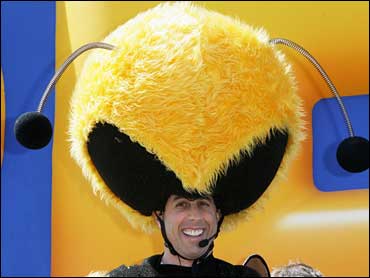 Forget the tuxedo. Jerry Seinfeld made his big appearance at the Cannes Film Festival wearing a fuzzy bumblebee suit and black tights.

"You know, one thing I hate is any kind of movie promotion that smacks of desperation in any way," the 53-year-old comedian said, before jumping from the roof of an eight-story luxury hotel, arms and legs flailing, and heading down to the beach on a cord.

Seinfeld's "Bee Movie" is the latest DreamWorks Animation film to dramatize the secret life of a pesky insect (following "Antz"). It doesn't open until November, but Seinfeld was in Cannes on Thursday showing 30 minutes of highlights. He has spent the past four years developing the film, writing the script and giving voice to its leading role.

His character, Barry B. Benson, is an ambitious young bee who dreams of life beyond the hive. After discovering that humans have stolen honey from bees through the ages, he takes the human race to court to try to right the injustice.

Other voices include Chris Rock as a mosquito trying to avoid being squished on a truck window; Renee Zellweger as a human florist who inspires a cross-species crush in Benson; and Matthew Broderick as Benson's best friend.

Before the stunt, Seinfeld worked the microphone at a Cannes theater where he screened the rough footage. The press corps tried to engage him in a little standup comedy.

"I would like to know if 'to bee or not to bee' is the theme of the movie," one reporter asked.

Another journalist ventured: "Will be there be a 'Cee' and a 'Dee' movie?"

Seinfeld gestured to Rock and suggested: "Why don't we handle the humor aspect?"

Rock, who voiced Marty the zebra in "Madagascar," said "Bee Movie" was different from most other DreamWorks creations because the humor is all Seinfeld's.

"This one has a singular vision, that's what I really like about it," Rock, 42, said. "Most animated movies are made by committee, and the comedy is scattered. They're great, but this one feels like a handmade suit."

"My belief in the film and confidence is that Jerry is actually going to bring animation to a whole new audience of people who may have not thought of these as for them, and at the same time it will continue to work as a family film," he said.

In one hilarious courtroom scene, Benson berates Sting (voiced by the singer) for stealing his moniker from the bee community. He narrowly escapes death at the hands of humans who swat at him with magazines — and he proclaims hefty Italian Vogue to be especially perilous.

Seinfeld said the idea for "Bee Movie" popped randomly into his head one day as he was eating candy. The next day, he was invited to eat dinner with Steven Spielberg.

"For a Jewish boy growing up on Long Island, to have dinner with Steven Spielberg is like being bar mitzvahed twice," Seinfeld said. The comedian claims he pitched the "Bee Movie" idea during an awkward lull in the conversation.

"I just wanted to get through the dinner and say I had dinner with Steven Spielberg, and he gets excited," Seinfeld said. "And that's how this happened."