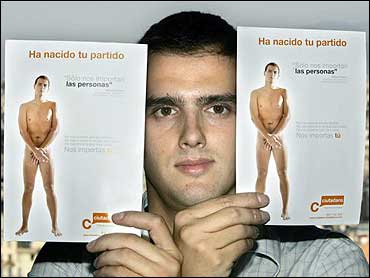 Albert Rivera's nude body is everywhere to be seen — just what he wants as he runs for president of Catalonia.

Rivera has filled the streets of Barcelona and other Catalan cities with thousands of posters of himself in the buff, modestly shielding himself with his hands.

The 26-year-old lawyer knows his campaign to lead this powerful northeastern Spanish region is a long shot. But he hopes at least to get voters talking about something else besides their role within Spain and whether they should speak Catalan or Spanish.

"We believe that we need a modern Catalonia where nationalism is not the only thing on the agenda," Rivera said in an interview. "Public money that's sunk into projects like Catalan-only sports teams or a Catalan national anthem should be destined to projects that encourage social equality."

His gimmick has brought attention to his fledgling Ciutadans, or Citizens, party as it tries to win seats in the Catalonia parliament Nov. 1. The party is stressing mundane issues like housing and transportation.

"If major brands are so daring in their ad campaigns, why can't a political party be?" he asked, chatting fully clothed in baggy jeans and an untucked dress shirt in a cafe near the party's headquarters. "We wanted to move away from traditional Catalan politics and show people that they can relate to us."

Ciutadans' platform features strong support for bilingual education in a region where it is virtually impossible for public school students to attend classes in Spanish.

The party also wants more low-cost housing for young people and discounts for students on all public transportation. But its main rallying cry is criticism of the overtly nationalist politics that have dominated Catalonia for decades.

The election comes five months after voters in the region approved a charter that granted Catalonia sweeping new powers in areas such as tax revenue, the judiciary and infrastructure.

All parties in the region backed the charter except the conservative Popular Party, which argues the arrangement unfairly gives Catalonia perks other Spanish regions lack and will jeopardize Spain's unity.

The elections were called a few weeks after the charter was approved in a referendum in June, when a fractious, Socialist-led coalition that shepherded the charter into law fell apart.

Although Rivera doesn't pretend to be a serious contender for president, his party is hoping its mix of unconventional campaigning and a youth-friendly platform will help them win one seat in the 135-member Catalan parliament. The president is chosen by the party or parties that form the government .

Capturing a seat requires at least three percent of the vote, about 100,000 ballots. Although the party has the backing of well-known cultural and intellectual figures in Catalonia, garnering so much support in so little time is not easy.

"In politics, you never know what the outcome may be, but Catalan parties tend to have very loyal clients, and it's hard for someone new to break in," said Carlos Torrecilla, a professor at the ESADE business school and specialist in marketing in the public sector.

"Ciutadans' strategy is a good one for a new party — breaking the mold is the only thing they can do to get attention. But to survive they'll need a long-term strategy."

Ciutadans' campaign image has been distributed on flyers to tens of thousands of people, and 10,000 posters are plastered on buses, billboards and buildings in the Barcelona area. The campaign image has drawn little public disapproval, even from conservatives.

"It's very well done!" Cristina Gollado, 70, said with a laugh she compared the photo on a flyer to the real Rivera standing next to her. "I'm old, so I was a little taken aback by the picture. But of course I'd vote for him, if only for his good looks."
By SARAH ANDREWS