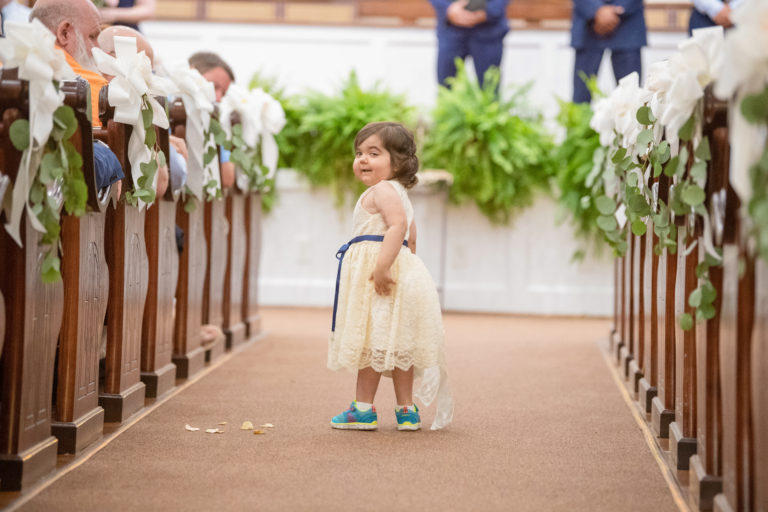 When Hayden Hatfield Ryals got a call that a baby girl with cancer was a match for her bone marrow, Ryals knew she had to save her. Now, years later, the little girl thanked her donor in a special way by serving as her flower girl.

Ryals signed up to be a donor while in college in 2015, but didn't think she would be a match with someone. "It's the easiest thing," Ryals told the Dothan Eagle. "It's a cheek swab -- swab your cheek, put it in an envelope and they send it off ... I thought there's like a one in a gazillion chance that I would ever be a match."

A year later in 2016, she received a call from a coordinator with Be the Match, which says it's "the largest and most diverse marrow registry in the world." The coordinator told Ryals, 26, she was a match with a little girl diagnosed with leukemia whose name she later learned was Skye Savren-McCormick.

"I had been struggling for a while; I had changed my major," Ryals told the Dothan Eagle. "...I was having trouble finding myself and feeling like I had a purpose. So the more that I talked to this coordinator with Be the Match, I started feeling like, what if this is my purpose?"

Ryals' donation helped Savren-McCormick find the road to recovery, but she faced many complications and eventually received a second transplant from an additional donor in 2017.

While Savren-McCormick was fighting leukemia, Ryals often thought about the child she donated to, reported WHIO-TV. Be The Match requires donors and patients to wait one year before contacting each other, and when the year was up, Ryals reached out to Savren-McCormick's mother.

Before long, Ryals asked if Savren-McCormick would serve as the flower girl in her upcoming wedding. Once Savren-McCormick received a clean bill of health from her doctors, she traveled with her parents from California to the wedding in Alabama.

Savren-McCormick met the woman who saved her for the first time at the wedding rehearsal, reports ABC News. "I walked up and I just dropped to my knees and all I could do was smile," Ryals said.

Soon after, Savren-McCormick wowed the crowd as she threw flower petals down the aisle for the bride, wearing a special present from Ryals: a bracelet of pearls inscribed with her name.

The two families say they are looking forward to seeing each other again soon, reports WHIO-TV.

"They are going to be part of our lives forever," Savren-McCormick's mother Talia said according to ABC News. "She saved our daughter's life."