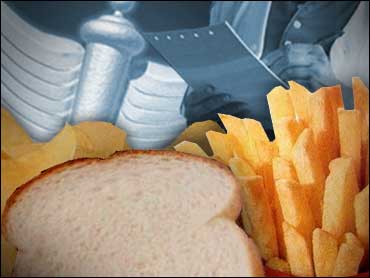 As the U.N.-sponsored meeting got under way in Geneva, the U.S. consumer group Center for Science in the Public Interest released findings in Washington from tests it commissioned on a dozen popular brands.

As in initial tests reported in Sweden, the U.S. tests also found high levels of acrylamide in some brands of french fries and potato chips.

The U.S. Food and Drug Administration, meanwhile, said it has developed its own method to test precise levels of acrylamide in foods and has begun testing dozens of different products.

That's a critical question, because understanding what makes acrylamide form could in turn lead to ways to limit, perhaps even eliminate, the substance.

Acrylamide, used to produce plastics and dyes and to purify drinking water, has been shown to be carcinogenic in animal experiments and is suspected of causing cancer among people exposed to high levels for long periods. Although traces of it have been found in water, its possible presence at high levels in basic foods came as a shock.

The initial alarm was raised by the publication in April of a Swedish study that some starch-based foods cooked at high temperatures contained acrylamide. Subsequent studies in Norway, Britain and Switzerland basically backed up the findings of Sweden's National Food Administration, WHO officials said.

However, a number of scientists have voiced misgivings about the validity of the Swedish results, which were based on 100 foods, and were released at a government news conference rather than passing through normal peer review procedures in a scientific journal.

The CSPI findings released in Washington agreed with European findings that French fries had the highest levels of acrylamide.

A large serving of McDonald's fries had the most, 72 micrograms, of the four fast-food competitors tested. A call to McDonald's was not immediately returned.

CSPI compared that to the EPA's limit of 0.12 micrograms in a glass of drinking water. Potato chips also had high acrylamide levels.

But there were puzzling fluctuations. One brand of corn chips had a tiny amount of acrylamide while another had a moderate amount and a brand of similarly made corn taco shells had lots.

No one knows why there would be such variation because so little is known about how acrylamide forms, said CSPI executive director Michael Jacobson.

"The big challenge is to figure out what are the chemical reactions and the conditions that lead to acrylamide," because there may be a way to avoid its buildup in food, he said. He noted that years ago, scientists learned they could avoid a nitrite-related cancer-causing substance simply by adding vitamin C to affected foods.

Until scientists have completed enough research to tell what the different levels in food may mean for health, consumers shouldn't panic, Oliver said.

Meanwhile, "there has long been reason ... to eat less greasy French fries and snack chips," said Jacobson. "Acrylamide is yet another reason to eat less of those foods."

"There's no indication that the low levels of acrylamide found in some foods cause any human health risk," responded Gene Grabowski of the industry's Grocery Manufacturers of America. "Acrylamide has been present in foods ever since foods have been baked or fried and we don't have any conclusive evidence right now that there's a reason to change dietary habits."

In Geneva about 25 scientists from universities and national food authorities, including the FDA, are meeting behind closed doors in the three-day session.

"They are trying to figure out what is known and what is not known," said Gregory Hartl, spokesman for the World Health Organization. Initial conclusions are expected to be announced Thursday.

WHO and the other U.N. sponsor, the Food and Agriculture Organization, have refused to identify the scientists to keep the meeting from being disturbed from outside so that discussions can be thorough.

The Swedish researchers said that "fried, oven-baked and deep-fried potato and cereal products may contain high levels of acrylamide." The same results were not found in boiled products.

Swedish government scientists estimated acrylamide could be responsible for several hundred of the 45,000 cancer cases in the country each year, based on experiments in which rats were fed fried food.

Jorgen Schlundt, coordinator of WHO's food safety division, said the type of cancers provoked by acrylamide in animals were not just limited to the digestive tract, but also included the mammary and testicular glands, and skin. But he emphasized there was no evidence to suggest this could apply to humans.

He said it was premature to predict whether the meeting would urge dietary changes, or recommend further studies in specific areas.