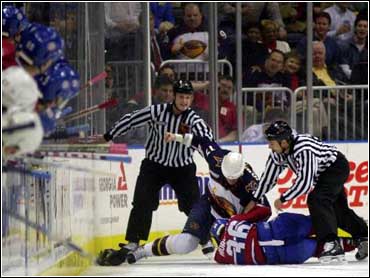 "It's tough. It is a pressure point," Vigneault said of the Thrashers' plight . "I'm impressed with the environment here and I think the people here, the fans, are going to have a very good team."

The Canadiens, struggling to compete with one of the NHL's lowest payrolls, must pass four teams before they can consider themselves contenders for the playoffs.

Beaten by Stevenson's two goals and a flurry of Montreal scoring in the third period, the Thrashers hardly seemed concerned about the future. The present is hard enough to swallow for a club owning the NHL's worst record at 11-40-6 and a 15-game winless streak.

"This is rock bottom," said Atlanta captain Kelly Buchberger, whose team has not won since beating Philadelphia 1-0 on Jan. 14. "It can't get any lower than this. We sure didn't show up tonight, and the score showed it."

With only 11 seconds remaining in the second period, Shayne Corson scored the go-ahead goal with a sweeping shot from the bottom of the left circle. Corson's goal, his fourth, was the game's only power-play score.

"Shayne got a huge goal for us," goalie Jeff Hackett said. "The key was we were playing a team that played back-to-back games. I've been there. I know what that's like."

Stevenson, who put Montreal up 1-0 with his fourth goal 10:08 into the second, gave the Canadiens a 3-1 cushion with 10:38 remaining. Following Francis Bouillon's slp shot from beyond the top of the right circle, Stevenson ripped the ricocheted puck past rookie goalie Scott Fankhouser from the middle of the left circle.

"Give them credit," Stevenson said. "They worked extremely hard. Hack came through for us when we needed the big save, and we need a big win tomorrow (at Carolina)."

Sergei Zholtok scored a team-high 18th goal with 6:27 remaining, and Patrick Poulin, who took a game-high five shots, ended the scoring with 4:41 to go with his eighth goal.

"That's the nature of this game," Fankhouser said. "A team takes advantage of any mistakes you make. They got in front of me and bumped me a little bit. Good teams do that."

Mike Stapleton made it 1-1 at 17:03 of the second by taking a pass from Ray Ferraro, who beat Dainius Zubrus on a faceoff, and scoring from 15 feet.