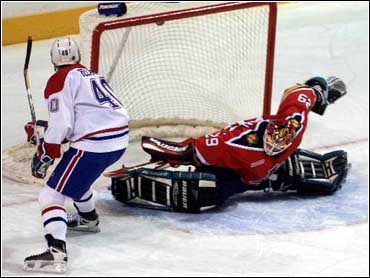 Jesse Belanger was just happy to be back in the NHL. Little did he know he would be the star of the game.

Belanger scored a pair of goals his first in the NHL in almost four years and added two assists to lead the Montreal Canadiens to a 4-1 win over the Florida Panthers on Monday night.

Belanger, recalled from Quebec of the AHL prior to the game, hadn't scored in the NHL since April 6, 1995, when he was with the Vancouver Canucks.

"I wasn't expecting that," Belanger said of his offensive output. "It was pretty fun to be here tonight. I had the crowd yelling my name behind the bench and they were cheering for me. It's hard to know how to react to that but I'm really happy about it."

Belanger was also a member of the Stanley Cup champion Canadiens in 1992-93.

Pavel Bure scored his league-leading 40th goal for the Panthers.

After Bure gave Florida a 1-0 lead 7:51 in, Belanger deked past Panthers defenseman Lance Pitlick and goalie Mike Vernon at 14:57 to tie it.

"I saw a little opening and then it was a one-on-one, and I slipped the puck through the defenseman's stick," Belanger said. "Then I faked a shot and went to my backhand. It was a pretty nice goal to get my confidence back."

Belanger assisted on Darby's goal at 8:03 of the second and backhanded Darby's pass over Vernon at 16:11 to make it 3-1.

Belanger, who had one assist in three previous games this season, got his seconassist of the game 6:40 into the third on Zholtok's power-play goal.

Montreal defenseman Igor Ulanov had two assists and was ejected late in the second for a vicious elbow on Peter Worrell. Ulanov blindsided Worrell beside the Canadiens net after the Florida forward knocked down Montreal goalie Jeff Hackett along the boards. Worrell and teammate Paul Laus were also ejected.

"I don't like it when guys are doing that, going after the goalies," Ulanov said. "He had enough time to step around (Hackett). I don't think it was the right thing for him to do."

Worrell was livid about Ulanov's hit.

"He came up high on me," Worrell said. "It was absolutely cheap. I was on my knees and he tried to throw a punch. I got up, and he turtled. He's a coward."

The Canadiens were forced to dress eight defensemen when Benoit Brunet was scratched from the lineup because of swelling around his eye caused by an injury sustained Saturday.