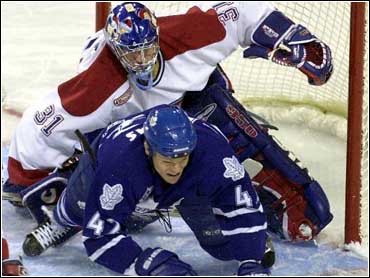 The speedy Petrov, who spent the last three seasons playing in Switzerland, got his first NHL goal in over four years to help the Montreal Canadiens to a 2-1 victory over the slumping Toronto Leafs.

"For sure, it's been a long time since I scored in the NHL," said Petrov, after he scored in his 20th game of the season.

"I didn't even score any in training camp. I'm glad to get it."

Petrov, who played for the Swiss team Ambri-Piotta, led the league with 93 points in 1997-98, and 83 last season. In parts of four previous seasons with the Canadiens, Petrov scored 20 goals.

"I knew I just had to keep working hard," he said.

Petrov added an assist on Sergei Zholtok's goal as the Canadiens extended their season-high winning streak to five while the Maple Leafs' season-worst winless run stretched to six (0-5-1).

"The first three months of the season, we found ways to win," Toronto goalie Curtis Joseph said. "Now it seems like we can't find any way to win. It's been tough sledding."

Sergei Zholtok also scored for the Canadiens, who moved into a tie with the idle Boston Bruins, one of three teams they need to get past to challenge for a playoff spot.

Steve Thomas scored his 15th of the season in the first period for Toronto, which outshot Montreal 26-24. Thomas put a high blast past the glove side of Jeff Hackett during a power play wit1:48 left in the period.

Montreal beat the Maple Leafs for the first time in four meetings this season, in front of a crowd of 21,273 at the Molson Centre.

Petrov took a feed from Zholtok on a 2-on-1, cut to the net and slipped the puck past Curtis Joseph 1:35 into the second.

Zholtok was helped off the ice at 9:04 of the second period after taking a slash on the back of the knee from Kevyn Adams, but returned moments later to put Montreal in the lead.

Petrov slipped the puck to Zholtok, whose low blast from the high slot beat Joseph at 17:14 for his team-leading 19th goal of the season.

The stocky, 5-foot-8 Petrov, who first played for Montreal from 1992-96, spent much of the early season in the minors, but had been playing on a line with Zholtok and Dainius Zubrus when he blew out a knee and missed 22 games.

Since his return on Feb. 10, the line has done well.

"You saw me jumping around more than (Petrov) when he scored," Zholtok said. "He deserved it. He's probably the smallest guy on the team, but he's the guy who probably works the hardest. We told him it was going to come. It's a big lift for him."

Canadiens coach Alain Vigneault said Petrov "is not a natural scorer, but when that line is on, we spend more time in the other team's end than our own.

"He keeps his legs moving. He skates and causes turnovers."