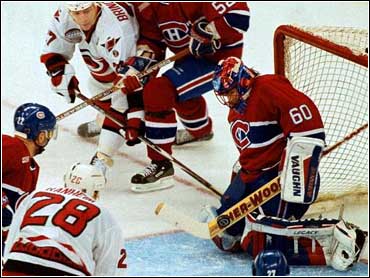 The Montreal Canadiens, beaten and battered most of the season with an NHL-high 388 man-games lost to injury, are suddenly in the playoff picture.

Jose Theodore made 26 saves and Martin Rucinsky scored twice for Montreal on Thursday night as the streaking Canadiens won their fourth straight with a 3-0 victory over the Carolina Hurricanes.

"We really focused on this game coming in," Montreal center Trevor Linden said. "This was a huge game for us. When you're in our position this is as big as it gets."

The victory moved Montreal within two points of the Hurricanes and six points behind the New York Rangers for the final playoff spot in the Eastern Conference.

"We just have to keep it going if we're going to have a chance at making the playoffs," said Theodore, who tied Buffalo's Martin Biron for the NHL lead with his fifth shutout. It was also the Montreal goalie's fourth since Jan. 11 and second in less than three weeks against the Hurricanes.

Linden sealed the win for the Canadiens, scoring his ninth goal with 5:36 left. Rucinsky added his 18th less than three minutes later.

Turner Stevenson assisted on all three goals to tie a career high for points in a game.

The Hurricanes appeared to have tied the game 1-1 with 10:22 left when Martin Gelinas batted the puck out of the air and it slid past Theodore during a wild scramble in front of the net. But referee Kerry Fraser ruled that no Carolina player touched the puck with a stick before it trickled across the goal lne.

"I thought I touched it with my stick," Gelinas said. "I didn't see the replay so I can't really tell."

Carolina, coming off a 3-1 road trip, was 7-4 in its last 11 games to inch back into the playoff mix. But the Hurricanes, opening a four-game homestand, were shut out at home for the third time.

"We've got to pull one from the top end now against one of the good teams," Carolina coach Paul Maurice said. "The pucks have to start going in."

Montreal jumped on top 1-0 midway through the first after Carolina wasted early scoring chances from in close by Gelinas and Bates Battaglia. Rucinsky tipped in his 17th goal off a nice feed from Linden as the Canadiens scored first for the 21st time in 31 games.

Carolina was 0-for-2 on the power play as Montreal has killed 35 of its last 37 short-handed chances in a 10-game span.

Maurice's 375th game moved him past Jack Evans into first place in games coached for the Carolina franchise.