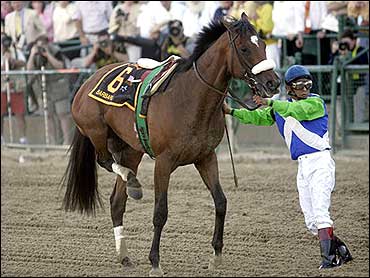 Jeff Hackett waited a long time for this shutout.

Hackett made 27 saves for his 20th career shutout and first of the season as Benoit Brunet's goal with less than eight minutes left in the third period lifted the surging Montreal Canadiens to a 1-0 victory over the Phoenix Coyotes on Tuesday night.

"It's about time," said Hackett, who won his fifth straight and got his first shutout since last March 24 at Edmonton. "I've been stuck on 19 and sometimes when you're trying to get a milestone like a 20th, it takes a little longer than you really want it to."

The win was Montreal's sixth in a row, the Canadiens' longest winning streak since recording seven straight wins in November of 1997. The Canadiens have gone 12-2-2-2 since Jan. 11.

"There are a lot of teams in the race," Brunet said. "It's going to be a battle until the end."

Hackett and teammate Jose Theodore have combined for six shutouts this season. Theodore is tied with Buffalo's Martin Biron for the NHL lead with five.

"I've had a few chances (to get a hutout) in the last few weeks," Hackett said. "I've had a lot of one-goal games, but I haven't been able to do it and tonight I finally got through."

Phoenix went 0-for-7 on the power play and was held to no shots in three opportunities during the second period.

"It was terrible," Rick Tocchet said of Phoenix's power-play effort. "It's been costing us a lot. We'd probably be eight points better this year if our power play's even halfway decent."

Canadiens captain Saku Koivu, who returned after missing the previous 40 games with a dislocated left shoulder, assisted on Brunet's goal with a pass to Brisebois at the point.

Martin Rucinsky, Montreal's leading scorer with 38 points, needed five stitches to close a cut to the inside of his lower lip when he was struck in the mouth by Phoenix defenseman Stan Neckar's stick in the first period.