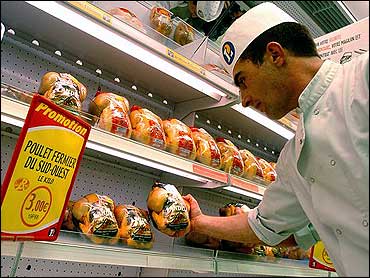 The Toronto Maple Leafs have not abandoned speed and offense as their recipe for success.

"I don't see why we'd change it," captain Mats Sundin said after his goal and two assists led the Maple Leafs to a 4-1 victory over the Montreal Canadiens in the season opener for the NHL's two oldest clubs on Saturday night.

"We had a lot of success with that offensive style last year. It's the type of game we love to play. We have a lot of good skaters and we like to move the puck."

Sundin scored a short-handed goal at 6:05 of the first period and saw his rebound converted by former Canadien Jonas Hoglund at 17:13 of the second period.

Martin Rucinsky put Montreal back in the game with a goal 7:02 into the third period, but Tomas Kaberle's shot from a bad angle went in off goaltender Jeff Hackett's arm at 10:23 to end the suspense.

Sergei Berezin added an insurance goal with 30 seconds to play.

"Everybody's psyched," added Sundin, whose team led the NHL with 268 goals last season en route to a 45-30-7 record. "I could tell in the last few days that everybody's confident."

Hundreds of Toronto supporters were among the full house of 21,273 at the Molson Centre as the Canadiens opened their 90th season showing the same lack of finish that caused them to miss the playoffs last season.

The Maple Leafs outshot Montreal 29-26 in an end-to-end match with multiple scoring chances for both teams.

"We made some mistakes in the defensive zone and every time, they got a goal,"Saku Koivu said after his first game since being named as the 27th captain of the Canadiens. "We had great chances in the second period on the power play and didn't score, but then they came right back and got one."

"That was a tough one for us."

Sundin poked the puck by defenseman Barry Richter at the blue line during a first-period Montreal man advantage and went in alone to Jeff Hackett and open the scoring.

In the second, Steve Thomas fed Sundin in front for a quick shot. The rebound went to an uncovered Hoglund, who lifted the puck into an open side.

Hoglund was let go by Montreal and picked up as a free agent by Toronto during the summer. He started the season on the Maple Leafs' top line despite failing to score in the preseason.

"I told him he was saving it for when it counts," Sundin said of his Swedish compatriot. "That should help his confidence."

"If I'm going to play with these guys, that's the kind of goals I'm going to get," Hoglund added. "I'll go to the net and whack at the rebounds."

Trevor Linden, in his first game for Montreal, slid a pass across the crease for Rucinsky to push into an open side in the third period but Kaberle got it back for the harmless-looking shot that fooled Hackett.

"It was a bad goal and I take responsibility for it," Hackett said. "The positive thing is that we had chances. That's just the way the sport is."