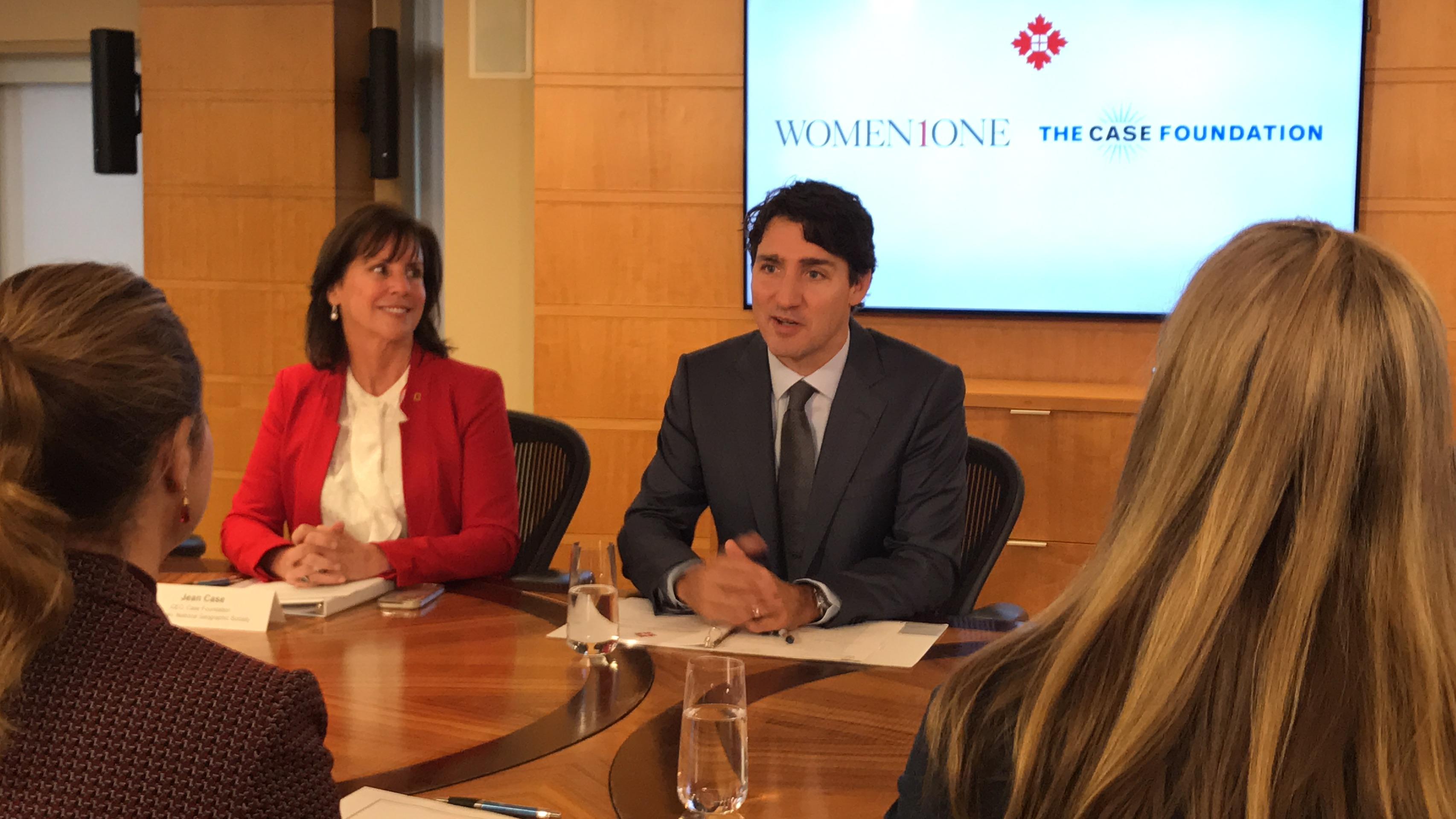 WASHINGTON, DC - Canadian Prime Minister Justin Trudeau argued Wednesday morning "how we empower women and girls in communities around the world… is how we're going to be giving our world opportunities to succeed in meaningful ways."

Trudeau hosted a roundtable discussion at the Case Foundation with women in powerful global leadership roles, including Arianna Huffington and Canadian Minister of Foreign Affairs Chrystia Freeland. It's part of the Case Foundation's celebration of "International Day of the Girl" in partnership with advocacy group WomenOne, headed by Dayle Haddon.

Trudeau's message centered around tackling women's issues on a global scale and across private and public partnerships, rather than entity-by-entity on their own.

"One of the things that often comes out is a lot of the things we do we do in silos – we do in our areas, we do all in, you know, what we can touch," he said ahead of the meeting. "We don't necessarily convene a broad enough group to reach out beyond where we can touch ourselves and being able."

"Being able to break down these silos and pull people together is really important because how we empower women and girls around the world is going to make a difference."

The Prime Minister has recently made a point to label himself a "feminist," and explained last month in New York how a Joseph Gordon Levitt video is what prompted his decision to start doing that.

"Even with where I was comfortable with the idea of being a feminist, I didn't actually come out and say that I was a feminist," he said at the Bill and Melinda Gates Foundation's Goalkeeper conference. "A video in 2014 of Joseph Gordon-Levitt looking at the camera and saying 'Yes, I am a feminist, I think men can be feminist and it's important.'" Trudeau said he then realized "it's okay for men to say that they're feminists in a public sense. Great—I'm gonna finally do that."

Some critics have challenged the idea of Trudeau as a "feminist," largely based on comments he made in 2011. Trudeau drew controversy over his reaction to Canada's updated a guide for new citizens. It included a line saying, "Canada's openness and generosity do not extend to barbaric cultural practices that tolerate spousal abuse, 'honour killings,' female genital mutilation, forced marriage or other gender-based violence."

Then a member of parliament representing Montreal and an immigration critic for the Liberal party, he said "the use of the word pejorative as 'barbaric,'" to describe those cases, "has more of an opportunity to set someone's hackles up."

After backlash, in many cases from Canada's Conservative party, Trudeau retreated and apologized.

"My problem with the use of the word barbaric is that it was chosen to reassure Canadians rather than actually change unacceptable behaviors," Trudeau wrote on Twitter, and apologized.

At Wednesday's meeting, the Prime Minister, sitting directly across from his wife, Sophie Gregoire Trudeau, praised her as the person who makes him a "better man" and "a better feminist."

"Each person around this table was chosen for their fierce intellect, their generous spirit and for their compassion for women's issues," Dayle Hannon, Founder and CEO of WomenOne, said of the meeting. "The prime minister's example as a feminist leader and his commitment to women's issues and women empowerment is an inspiration to us all. The genesis of this roundtable begin in Ottawa on the International Day of the Woman and its auspicious today that it has come to fruition in Washington, D.C. on the International Day of the Girl."