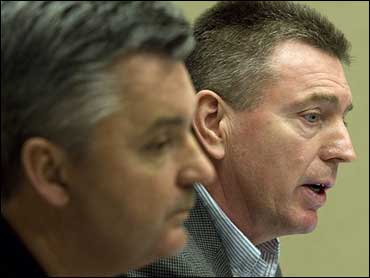 Canadian search and rescue crews said there is no evidence of other survivors and they will end the search for survivors of a helicopter crash off the Atlantic coast of Newfoundland on Friday night, a day after it crashed into the sea with 18 people on board while en route to offshore oil facilities.

On Thursday, one survivor and the body of another person were found after the Sikorsky S-92 issued a distress call and ditched 30 miles out to sea.

Rescuers were still holding out hope Friday since those aboard were believed to be wearing survival suits, which serve as life preservers and retain body warmth in frigid waters.

"As of this time there are no other persons that we've located whatsoever so it appears there are no survivors," said Maj. Denis McGuire of the Joint Rescue Coordination Centre during a news conference Friday afternoon.

McGuire said the search will end at 7:30 p.m. local time and the case will be handed over to the police and Transport Canada as a recovery operation. He said the families of the missing persons are "distraught" but understand that there is almost no chance of survival after more than 24 hours in the ocean.

Mike Cunningham, lead investigator for the Transportation Safety Board, said the helicopter will be raised from the ocean floor, an operation that could take about a week.

Crews worked overnight with the help of night-vision goggles, but there were no signs of more survivors 24 hours after the Thursday morning accident, Canadian authorities said.

The survival window is about 24 hours with the suits and water-activated locator beacons, but McGuire said there had been no signals from the beacons. He also acknowledged that rescuers were less likely to find anyone now that 24 hours have passed.

Winds are gusting to about 37 miles an hour and sea swells are choppy in the search area on Friday.

"Unfortunately, there hasn't been any sightings," Jeri Grychowski of the rescue center said after the 24-hour mark had passed.

The sister-in-law of one of the missing, Derrick Mullowney, a steward on the Sea Rose, was in tears as she spoke about the accident.

"We only buried his father about a month ago. His father died on January 30th and now this," said Sharon Mullowney.

She said Derrick Mullowney, who lives near St. John's, is 52 and has been working in the offshore for nearly 30 years.

Two life rafts were spotted in the water early Thursday amid debris from the helicopter that was spread over a six-mile area, but rescuers later confirmed they were empty.

Survivor Robert Decker is at St. John's hospital where he's reportedly being treated for a broken bone and hypothermia. He was listed in critical but stable condition in the hospital's intensive care unit.

Newfoundland Premier Danny Williams told reporters he's known Decker for years said he was a member of a St. John's yacht club and is familiar with the water. He speculated his experience as a sailor might have helped him when the chopper ditched.

The pilot of the helicopter had reported mechanical problems, but the cause of the crash was still being investigated. The crew of a Provincial Airlines aircraft flying over the area reported seeing the craft floating upside down a few minutes after the crash.

The Transportation Safety Board's Cunningham said it's possible that balloons could be placed under the helicopter and then inflated to raise it to the surface. But before that happens, he said a remote submersible machine equipped with cameras will be sent to the ocean floor as soon as Saturday to examine the wreck.

The crash came less than a month after a helicopter ferrying oil workers crashed into the North Sea off Scotland. All 18 aboard were rescued from the chilly waters after the aircraft landed upright a few hundred yards from the oil platform and was kept afloat by inflatable bags that deploy when the craft lands on water.

The Canadian S-92 Sikorsky helicopter, described as no more than four years old, had the same safety features when it went down 55 miles southeast of St. John's, the provincial capital, said Rick Burt of Cougar Helicopters, the operator of the aircraft.