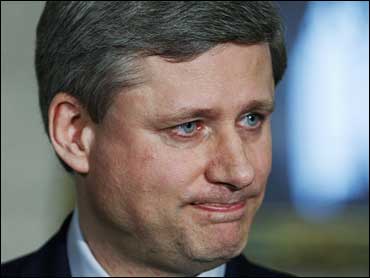 Canada's Conservative prime minister appeared poised to retain his job as polls opened in Tuesday's national election but he faced a greater challenge in winning a parliamentary majority to bolster his power.

Both polls and pundits predicted another minority government for Prime Minister Stephen Harper.

Harper, who has had a tenuous hold on power since the 2006 election and is forced to rely on the opposition to pass legislation, called the vote in hopes of winning the 155 seats needed for a majority in the 308-seat Parliament.

But Harper, the first major world leader to face election since the global credit crisis worsened, has been hurt by his slow reaction to the market meltdown, and that - among other missteps - may have cost him his bid for the majority.

"He's probably maneuvered himself to a position where he can probably hold power but he won't actually be able to implement his agenda," said Robert Bothwell, director of the international relations program at the University of Toronto. "I think the absolute best result for Harper is a stalemate."

Polls at the start of the campaign had Harper winning a majority, but the prime minister appeared to hurt himself when he said during a debate that Canadians were not concerned about their jobs or mortgages. Days later, he said stocks were cheap.

Canada's main stock exchange then had its worst week in almost 70 years.

Harper has since tried to undue the damage, saying he knows Canadians are worried. He contrasted Canada's economic and fiscal performance to the more dire situation in the U.S.

The prime minister has maintained that Canada will avoid the mortgage meltdown and banking crisis that are hitting the United States and Europe. But his government announced last week that it will buy up to $21 billion in mortgages from the country's banks in an effort to maintain the availability of credit.

Analysts said Harper wanted the election before the economy got worse and ahead of the U.S. presidential election in November, which could put a Democrat in the White House and encourage Canadians to choose a more liberal government.

Opponents painted Harper as a right-winger who would reshape the landscape like a U.S.-style Republican.

Harper's rival, Liberal leader Stephane Dion, hopped from the Atlantic coast province of New Brunswick inland to Quebec and then headed for Vancouver. He urged the divided left to vote for his party and dismissed talk he would step down as party leader if he loses.

Dion is a former professor from the French-speaking province of Quebec whose struggles to communicate in English have become an issue. Dion's English is accented and awkward. He stumbles over words during speeches and his grammar is often mangled.

"It just causes a lot of people to turn off. They claim they don't understand him," Bothwell said.

The opposition Liberals have traditionally been the party in power in Canada, forming the government for more than 65 of the last 100 years.

Dion has moved the party to the left by staking his leadership on a "Green Shift" tax plan. Dion, a former environment minister who named his dog Kyoto after the Japanese site of the first climate change accord, wants to introduce a carbon tax on all fossil fuels except gasoline.

Dion has had little success selling the plan to Canadians, many of whom view him as a weak leader.

Since becoming prime minister in 2006, Harper has extended Canada's military mission in Afghanistan and pulled Canada out of the Kyoto Protocol, which commits industrialized nations to reduce greenhouse gas emissions.

Harper supported the U.S.-led war in Iraq when he was in the opposition in 2003. Dion was part of the Liberal government that opposed the war.

A Harris-Decima poll put voter support for Conservatives at 34 percent, followed by the Liberals at 25 and the New Democrats at 19 percent. The Bloc Quebecois was at 11 percent and the Green party had 9 percent.

The poll represented 1,218 interviews conducted Thursday through Sunday with a margin of error of 2.7 percent.