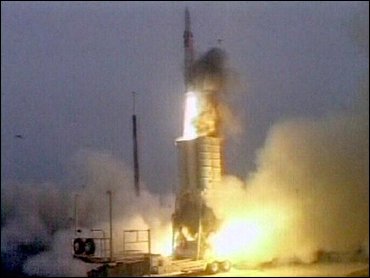 Prime Minister Paul Martin announced Thursday that Canada would opt out the contentious U.S. missile defense program, a move that will further strain relations with the United States but please Canadians who fear the program could lead to an international arms race.

Martin, putting an end to nearly two years of debate over whether Canada should participate in the development or operation of the multibillion-dollar program, said Ottawa would remain a close ally of Washington in the fight against global terrorism and security on the continent.

He said he intended to talk to U.S. President George W. Bush later in the day and that U.S. Secretary of State Condoleezza Rice had been informed of the decision on the sidelines of the NATO summit in Brussels on Tuesday.

Talking to reporters minutes after his foreign minister first announced the no-go before the House of Commons, Martin said Canada would instead focus on strengthening its own military and defense in proposals laid out in the federal budget on Wednesday.

"Canada recognizes the enormous burden that the United States shoulders, when it comes to international peace and security," Martin said. "The substantial increases made yesterday to our defense budget are a tangible indication that Canada intends to carry its full share of that responsibility."

The federal budget presented to the House of Commons calls for
$10.5 billion in the next five years to increase the country's
beleaguered armed forces - including an additional 5,000 soldiers
and 3,000 reservists - the largest commitment to defense in two
decades. It also called for another $807,950 to improve Canada's
anti-terrorism efforts and security along the unarmed, 4,000-mile
border with the United States.

When Bush visited Canada in December, he surprised Ottawa with several unsolicited pitches for support of the defense shield, which has been testing interceptors capable of taking out incoming missiles targeted at the North American continent.

Martin, who leads a tenuous minority government, has said that Ottawa would not support what he called the "weaponization of space." While he supported joining the program when he was a candidate for the Liberal leadership, Martin has retreated since polls indicate that a majority of Canadians oppose the program. Many believe that the umbrella, when fully implemented, could lead to an international arms race.

The Bush administration has tried to make a public show of understanding that Martin heads up a minority government that could fall over such a contentious debate.

But U.S. Ambassador Paul Cellucci told reporters Wednesday that he was perplexed over Canada's apparent decision to allow Washington to make decision if a missile was headed toward its territory.

"Why would you want to give up sovereignty?" he said. "We don't get it. We think Canada would want to be in the room deciding what to do about an incoming missile that might be heading toward Canada."