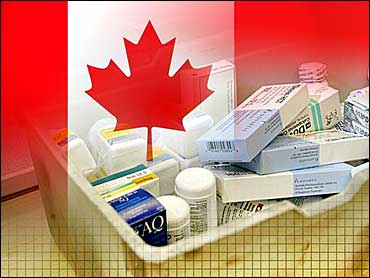 Urged on by the U.S. government, Canadian officials are cracking down on companies, pharmacists and physicians within their borders that help American citizens get cheaper prescription drugs.

But complex jurisdictional issues guarantee the enforcement won't be quick or simple.

Although the U.S. Food and Drug Administration has escalated threats to shut down companies exporting drugs to America, FDA Commissioner Mark McClellan said recently there are "no automatic mechanisms set up between our countries."

"We have to have those discussions," he said. "We have to work together to identify where our laws match up and where they don't."

High-level U.S. and Canadian health officials have met several times in recent weeks to coordinate an attack on the booming Internet pharmacy trade.

The FDA says it cannot guarantee the safety and dosages of imported products and is especially concerned about Internet sales.

Critics, however, charge that the agency, the Bush administration and some influential lawmakers who are trying to undermine efforts to let people buy less costly drugs are being swayed by the politically powerful drug manufacturers.

But the FDA has no jurisdiction in Canada, and its counterpart, Health Canada, has only broad authority over drug safety issues.

Instead, most direct enforcement over pharmacists and physicians co-signing and filling prescriptions for American patients falls to separate organizations in each Canadian province, where regulations vary.

"The challenge is, the practice taking place is illegal in the U.S. and the U.S. has enforcement problems, but in Canada the activity of the pharmacists follows the letter of the law," said Jeff Poston, executive director of the Canadian Pharmacists Association. "And (government officials) don't have that many legal or policy levers to play with at the moment."

Medical organizations in Canada oppose the Internet trade but acknowledge that enforcement is tricky.

"It's legal for a (Ontario) pharmacist to fill the prescription if an Ontario doctor co-signs," said Ruth Mallon, vice president of the Ontario Pharmacists Association. Pharmacists could be in trouble, she said, if regulators could prove they knew a doctor didn't see the patient and was part of an Internet operation.

The increased attention has yet to stem the surging Internet pharmacy business, which is scattered across Canada but thrives in Manitoba and Alberta provinces, where regulations are more friendly.

More than a million Americans reportedly order drugs from Canada each year. Cash-strapped U.S. cities and states are exploring ways to save money by allowing their workers to buy the much cheaper Canadian drugs, and members of Congress are pressuring the FDA to find ways to sanction the cross-border purchases.

According to Canadian law, only licensed pharmacists may dispense prescription drugs. Other standards require that physicians have a doctor-patient relationship with someone before prescribing drugs for that person.

But because provincial laws vary, Internet companies say they are operating within the law.

Generally in Internet sales, U.S. patients send prescriptions written by American doctors to the Canadian company, which has it reviewed and co-signed by a Canadian physician, then filled by a licensed Canadian pharmacy.

"We're in total compliance with Health Canada at this time — we're not breaking any laws in Canada or in the United States," said Anthony Howard, president of CanaRx. The Ontario-based company provides prescription drugs to city employees in Springfield, Mass., the first such U.S. program.

The FDA concluded that CanaRx is illegally exporting drugs, and has asked Canadian authorities to investigate. The Ontario College of Pharmacists confirmed it is "looking into" pharmacies that do business with CanaRx to determine if they are violating provincial law.

Other enforcement in Canada is on the rise.

In a letter last week to provincial regulators of pharmacists and physicians, Health Canada stressed the importance of enforcing laws on Internet pharmacies.

Canadian officials bristle at suggestions their drugs are unsafe, insisting their approval process is as rigid as the FDA's. But they also worry the cross-border trade will trigger a potential drug shortage, increase prices and raise questions about their drug safety.

But the Internet companies say they've seen no drug shortage, and they are not folding.

"What they've got to understand is, we're not going away," said CanaRx's Howard. "We're going to stick to this until the laws are changed."

A growing number of lawmakers agree.

"The FDA can try to lip-sync the pharmaceutical industry's line, but people are going to continue to go over the border to buy the drugs they need at the prices they can afford," said Rep. Rahm Emanual, D-Ill.

And that, said Canadian officials, is a problem no amount of enforcement may correct.