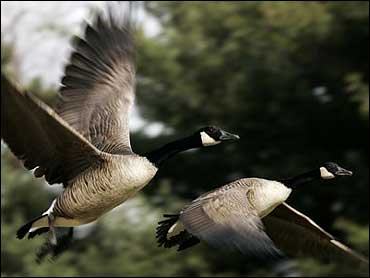 A flock of Canada Geese was responsible for the bird strike that knocked out both engines of US Airways Flight 1549, causing the Airbus and its 155 passengers and crew to plunge into the icy Hudson River last month, the National Transportation Safety Board says.

Investigators with the NTSB have not determined how many birds hit the plane, but a single Canadian goose weighs between 5.8 and 10.7 pounds - that's sizable enough to destroy an engine on an Airbus A-320, according to investigators.

Scientists at the Smithsonian Institution's Feather Identification Laboratory made the determination that Canadian geese were the culprits by comparing microscopic feather fragments recovered from the plane's engines with feathers in their collection. The lab has evaluated 25 samples of bird remains extracted from both engines at the manufacturer's facility in Cincinnati.

NTSB investigators also worked with wildlife biologists from the United States Department of Agriculture both at the accident scene in New York City and during the engine teardowns.

The plane's right engine was recovered on Jan. 21, 2009, six days after the crash. An examination of the fan blades showed evidence of "soft body impact damage," the NTSB says. "The engine's electronic control unit was missing and numerous internal components of the engine were significantly damaged," according to an NTSB press release.

Bits of the geese were found in the right engine and on the wings and fuselage. Investigators scraped the bits from the plane and external parts of the engine and provided samples to the agriculture department, for DNA testing, before the engines were disassembled. A single feather was found attached to a flap on one wing. That feather was among those used by the Smithsonian lab in its analysis.

For researcher Carla Dove, the dozens of packages received daily at the Smithsonian lab are the black box of bird strike investigations, reports CBS News correspondent Bianca Solorzano. Tiny clues such as feathers, claws and other remnants left behind when bird meets plane, known as "snarge," are used to analyze bird-strikes. was given exclusive access to the lab.

Dove and her team eagle-eyed samples from 4,600 bird strikes last year, checking out details ranging from feather structure to DNA.

With the help of the Smithsonian's collection of 62,000 stuffed bird specimens, they can successfully identify a bird 98 percent of the time.

"If you know for example it's a bird that likes to nest on flat areas with low growing grass, if you just let the grass grow sometimes that will discourage those species from coming into the area," says Dove, the lab's director. "It's simple, but it's a complicated process, there is no silver bullet to prevent bird strikes."

Additional tests will be conducted to determine if the birds were resident or migratory.

(NTSB)
According to the NTSB, the turbofan engines used on the Airbus A-320 are certified to "withstand the ingestion of a four-pound bird without catching fire, without releasing hazardous fragments through the engine case, without generating loads high enough to potentially compromise aircraft structural components, or without losing the capability of being shut down."

Anything bigger than that, and all bets are off.
By Adam Hutton