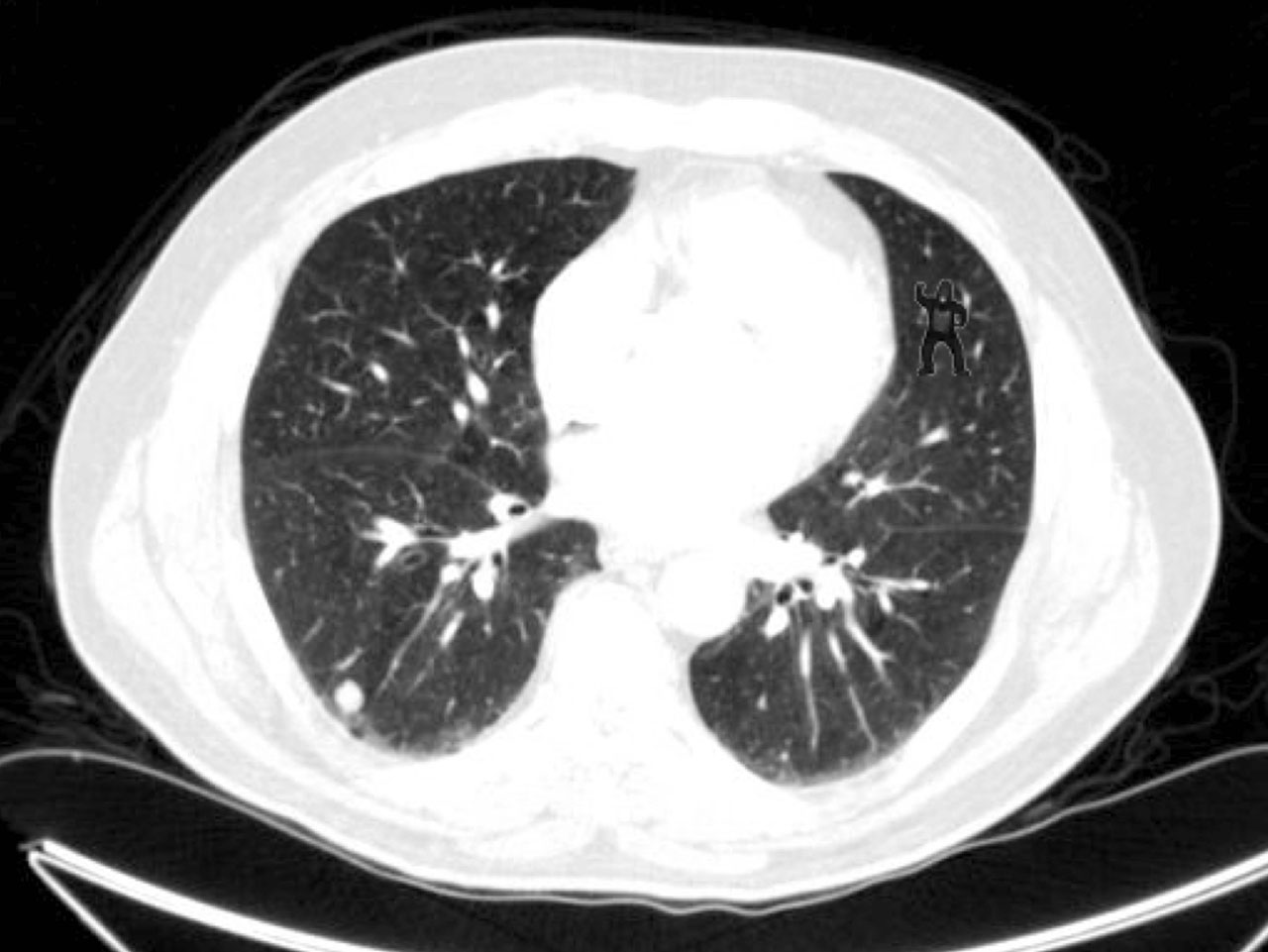 Notice anything strange about the scan above?

If you didn't see the dancing gorilla in the upper right hand corner, you're not alone. An upcoming study from psychological scientists at Brigham and Women's Hospital in Boston showed that 83 percent of radiologists failed to spot the animal, even though they went past it four times on average.

The authors of the study, which will be published in a future issue of Psychological Science, tested 24 credentialed radiologists -- including nine from Brigham and Women's Hospital and 15 expert examiners from the American Board of Radiology. Radiologists were asked to look at five lung CT scans, each which contained about 10 nodules or abnormalities. They were asked to click on anything strange on the scans. On the final scan, a gorilla about 48 times the size of an average nodule was placed in the upper right hand quadrant.

For comparison, the researchers also tested the same scans on 25 subjects who had no medical training. They were trained for 10 minutes on how to find lung nodules before they looked at the 5 scans.

The expert radiologists were able to find the correct nodules 55 percent of the time. However, 20 out of the 24 radiologists admitted they were unable to see they gorilla even though they scrolled past it an average of 4.3 times. Researchers also determined by eye-tracking that radiologists spent 5.8 seconds looking at the scan with the gorilla, and out of the 20 radiologists who did not see the gorilla, 12 had looked directly at it.

In comparison, none of subjects with no prior medical training were able to see the gorilla. They also were only able to spot nodules 12 percent of the time, and looked at the scans an average of 4.9 seconds.

An additional 12 non-medical professionals were shown a movie of the scans and specifically told to say whether or not they saw a gorilla, in order to determine if it was easy to spot the animal if the subject was aware of it. Eighty-eight percent of them were able to find the gorilla even though they were given less time to look at the scans than the average time spent by both the radiologists and the non-medically trained group.

The phenomenon of missing something right in front of you is known as "inattentional blindness" and was made famous in part by the "The Invisible Gorilla" experiment conducted by Christopher Chabris, an assistant professor of psychology at Union College in Schenectady, N.Y., and Daniel Simons, a professor in the department of psychology and the Beckman Institute at the University of Illinois. During the selective attention cognitive test, subjects were instructed to count the number of times people in white shirts passed the basketball.

What most people failed to recognize was the gorilla that walked among the people. Because people's brains were focused on counting the passes, they often ignored other superfluous information. Smithsonian Magazine explained that our brains -- not our eyes -- only show us a specific part of what is in front of us if we are focused on a certain task. This makes it possible to not notice strange and usual things that might be in plain sight.

Lead study author Trafton Drew, a post-doctoral fellow who studies attention at Harvard University, told NPR that he wanted to study people that were trained to notice minute abnormalities. He chose radiologists for their ability to spot tiny nodules that he couldn't even notice if they were pointed out to him.

"The larger point of the (new) paper is that even these expert searchers miss things if they are not looking for them," Drew explained to CBSNews.com in a separate email interview. "Radiologists are amazingly good at finding cancer, but that does not mean that they see everything. One reason that they are so good at detecting cancer might be that they are really tightly focusing their attention on the task at hand. The consequence of focusing your attention really tightly is that you may be prone to missing things which may be pretty obvious in retrospect."

Even though the radiologists missed the "giant" gorilla, Drew doesn't believe that it is bad news. However, he advised that patients can help medical professionals by letting them know what exactly is bothering them.

FDA approves most expensive drug ever, a gene therapy for hemophilia B
Michelle Castillo