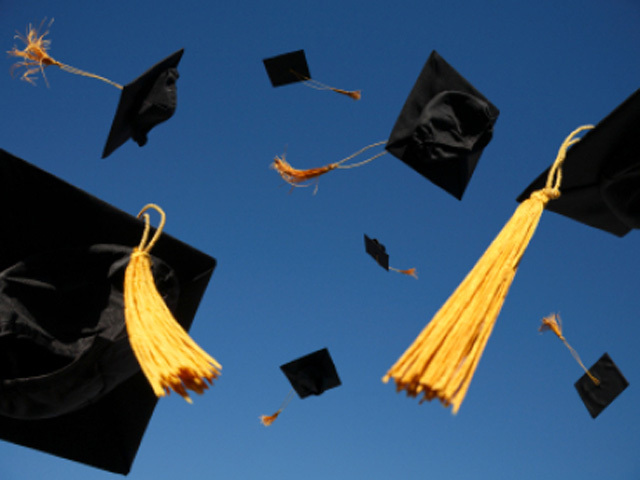 At a meeting with college leaders this week, President Barack Obama was looking for ideas. Amid record budget deficits, can Washington actually do anything to help make American colleges less expensive and more productive?

Those related challenges are front and center for everyone from Occupy protesters to business leaders concerned about American competitiveness. And expert opinion on what Obama — or any president — can do about the problem varies, from very little to quite a lot.

Debating the value of a college education

Where you stand depends on where you think the cause lies — with inexorable economic forces that make it virtually inevitable college costs will rise faster than inflation, or with inefficiencies and shortcomings in higher education itself that government policy could help correct.

The administration does have one model of which it's proud. That's the $4.3 billion "Race to the Top" fund for K-12 education reform, which used a relatively small slice of stimulus dollars as a prize to nudge dozens of states competing for it into reforms like expanding charter schools and developing common standards. The structure also helped at least dilute, though not avoid, criticism that Washington was stepping on the states' toes.

Could something comparable be in the works to push reform in higher education? Race to the Top started in 2009, when the administration was looking for smart ways to spend stimulus dollars. These days, new spending is out of the question.

JFK assassination: When a nation coming of age lost its youth

Still, the federal government spent $50 billion in grants to college students last year and more than $100 billion in loans, not to mention the billions more in aid to states and research. That adds up to a lot of carrots. Participants in the White House meeting on Monday said there's clear interest in better leveraging that money to encourage reforms at the state and institutional level — reforms like performance funding, giving students incentives to stay tightly on their academic track without taking extra courses, and redesigning the giant introductory classes where students often get lost and never recover.

"We put on the table the notion of having some sort of program, maybe modeled on Race to The Top, where could there be some incentive provided that states could compete for if they were willing to make certain policy changes," said William "Brit" Kirwan, chancellor of the University System of Maryland. Other ideas discussed included ways to make sure financial aid is allocated to the neediest students, to encourage states not to cut higher education funding, and to encourage experiments already under way in many states, such as handing out government aid dollars as students meet benchmarks toward graduation, not just once they enroll.

"They're really interested in using resources they do have to get a lot more results," said Kirwan. "What they were trying to figure out here is, 'What can we do in terms of the innovation that's out there and translate that into reasonable federal policies?'"

He emphasized, along with other participants, that Obama and Secretary of Education Arne Duncan wanted to hear what was working and get ideas for how Washington might help scale up reforms. But they gave the impression substantial policy proposals will be in the works as the administration draws up new budget plans in the coming months. The White House declined to comment further.

Obama has called for the United States to regain its now-lost global lead in college completion by 2020, and the administration's interest clearly reflects a spate of recent attention on college costs. Average tuition and fees at public colleges rose 8.3 percent this year and, with room and board, now exceed $17,000 a year, according to the College Board. High costs are certainly one reason about a third of students at four-year colleges seeking a bachelor's degree fail to complete one — a huge source of waste in the system.

Duncan and Vice President Joe Biden were scheduled to talk about college affordability Thursday at a high school in Florida. Current high school seniors, the White House noted in promoting the event, have seen college prices triple since they were born. Biden planned to highlight steps the administration has already taken on affordability but also to call on colleges to "do their part to contain costs and ensure college remains within reach for the middle class."

What can Washington actually do about the problem? American higher education is highly decentralized, and most federal student aid goes to individual students who are free to use it where they wish, which limits leverage.

Money alone clearly isn't the answer. Washington has poured billions more into higher education in recent years — the Pell Grant program alone has doubled in just two years to roughly $35 billion. There's also been billions in support for cash-strapped states. But that has mostly backfilled cuts by the states themselves, and the tuition numbers show it's hardly contained price increases.

One theory on college costs favored by many economists holds that it's virtually inevitable college prices will increase faster than overall inflation. The reason: Higher education is a face-to-face industry where it's very hard to improve productivity — to serve more people with fewer workers. In any such business, it's almost certain costs will rise more than in other industries, like manufacturing, where productivity gains are easier. Other face-to-face businesses, from symphonies to barbers, face the same problem, but college costs get more attention for obvious reasons — customers have to write much bigger checks, and feel strongly that access to higher education is the ticket to social mobility.

If that's the case, it isn't something any president can do much about, particularly in the complicated system of independent and state-supported universities.

"The word 'education' is not in the Constitution," said Robert Archibald, an economist at The College of William & Mary and co-author of the recent book "Why Does College Cost So Much?" ''We have an incredibly decentralized system of higher education, and it's hard for the federal government to get at these kinds of issues. I can't think of a way that they could be very effective."

But at the other end of the spectrum, many experts contend what ails higher education isn't just global economic tides but fixable cultural and policy shortcomings — bulky bureaucracies, too little accountability, too much emphasis on enrolling students but not enough on moving them through. They believe higher education can in fact be more productive — for instance, with online classes that cut overhead costs for things like heating classrooms. Some colleges, like the University of Maryland-Baltimore County, have demonstrated substantial performance improvements are possible in large introductory classes where students used to fall through the cracks.

The improvement camp includes the Lumina Foundation for Education, whose president and CEO Jamie Merisotis was also at the White House meeting. Lumina has studied experiments across the country including policies in Florida and Pennsylvania that target funding based on how colleges perform, not just how many students they enroll. There are also student incentives, like in Texas, where students can receive $1,000 for completing a degree within three credits of the minimum. That encourages them to limit their electives, and avoid taking up space and aid dollars.

"These are experiments that haven't been applied at a broad scale," Merisotis said. "Those are the kinds of things (the White House) really wants to see if there's potential at the federal level."

Jane Wellman, one of the country's leading experts on productivity in higher education, said she believes there are ways to encourage reform, but it's important that Washington take a supporting role.

"I don't want to see our federal government accomplish better policies with the states by increasing its regulatory role in higher ed," said Wellman, who was also at the White House meeting. "The states are different, they need to be able to find their own solutions."

Bio: Justin Pope covers higher education for The Associated Press. You can reach him at twitter.com/jnn_pope97