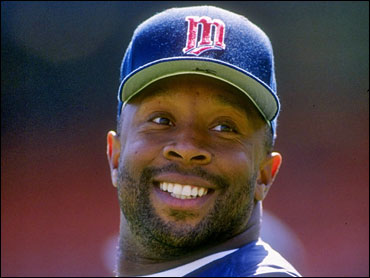 Before he suffered a life-ending stroke, Minnesota Twins star Kirby Puckett was happy and upbeat, still had a love for baseball, and was a strong supporter of organ donation, according to his former wife and the woman he planned to marry.

"I do want people to know that Kirby was a very happy man and that retirement gave him the opportunity to do things he always wanted to do," said Jodi Olson, who had planned to marry Puckett. "He was just ready to live the rest of his life."

His former wife, Tonya Puckett, said the Twins Hall of Famer was a believer in organ donation, and officials were evaluating whether that was possible earlier this week.

"I just know there are eight organs, one of which might be a match for his sister, Jackie," said Tonya Puckett, adding that Jackie, who lives outside Chicago, has kidney disease.

"I don't know the other organs they have (potentially) found matches for," she said. "It's just amazing. That's how my life with him was. He always made it happen, found a way to let somebody benefit; made some good out of everything, even in his death. How can you top that?"

Even in life Kirby Puckett had tried to help others through organ donation. Tonya Puckett said that when former Twin Rod Carew's daughter Michelle needed bone marrow, Kirby went to see if he was a match.

Olson, who was to marry Kirby Puckett on June 24, said she and Puckett were happy and "entering the next chapter in our lives."

"He certainly didn't give up on baseball. He watched it constantly," she said.

Olson said Puckett had been working out with a personal trainer at their house in Scottsdale, Ariz., to prepare for the wedding.

"I know a lot of articles have come out questioning whether his weight was the reason for this," she said. "And his weight had absolutely nothing to do with this."

"There were no signs, whatsoever, that this could happen," she said. "He told me he loved me as soon as he woke up in the morning (Sunday), and it all happened in a split second."

Olson said she called 911 and rode in the ambulance with Puckett, but was not able to communicate with him. She said he never regained consciousness.

Olson said she wanted people to know that Puckett loved his children, Catherine and Kirby Jr., and that he had become close to her son, Cameron. She said she was thankful for the support of Tonya Puckett.

"Tonya has been truly wonderful through this," Olson said. "I'm very close to his siblings. He was very close to my family. Which, sometimes, people think is uncommon. But it was one big happy family."

Tonya Puckett said it's been difficult to hear the media rehash the low points in their relationship.

"I know that I've made peace with Kirby," she said. "I really have. And for me, that came a long time ago. I can tell you that I've never loved a man like I loved him."

On Sunday, friends and fans will remember Puckett at a Metrodome memorial service at 7 p.m. Gates will open at 6 p.m., with no reserved seating. The Puckett family will hold a private visitation and memorial service Sunday afternoon.

Tonya Puckett said she is pleased that his memorial service will bear the imprint of their teenage children.

"There are so many people who love Kirby who are helping making decisions as far as the funeral goes," she said. "Wherever Kirby is I want his children's hand prints" on his services. "Because Kirby's life was about his kids."